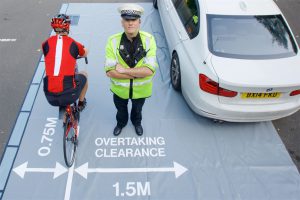 Camcycle welcomes 'Op Velo' from Cambridgeshire Police. This operation follows the lead of other police forces such as West Midlands with their 'Operation Close Pass' which resulted in a 20 percent reduction in incidents in the first year. We anticipate that this Operation and the subsequent public awareness campaign will encourage better driver behaviour and hence make cycling safer in Cambridge and surroundings.

We would also like to see Cambridgeshire Police further expand on this excellent initiative by prosecuting offences using video evidence supplied by victims of close passes and other dangerous behaviours.

We still await a public correction of earlier statements from the Cambridgeshire Police and the Police and Crime Commissioner, ones which essentially encouraged dangerous and illegal close passing behaviour. However, we do see this as a positive sign that the Police are now taking this issue seriously.

Fear of cycling on the roads is a major barrier to many people cycling. With ever-increasing congestion and air pollution issues in Cambridge, it is vital that we do whatever we can to get more people to choose sustainable transport options. We thank the Police for their support and action.

See our earlier statements and articles about Operation Close Pass: