Operation 'Close Pass' is a scheme devised by West Midlands Police as a low-cost way of preventing collisions caused by motorists who are driving too close for comfort. WMP claim this has resulted in a reduction in the number of cyclists killed or seriously injured on the roads by 20% over the last year. There have been calls for a wider rollout around the country.

We are keen to see it in our area, but Cambridgeshire Police have decided to refuse its rollout here, as Cambridge News reports.

Our full statement to the press is as follows:

Camcycle is beyond disappointed in Cambridgeshire Police. We are angry that they are apparently advising drivers that it is OK to pass closely because maintaining the speed and flow of motor traffic is more important than the safety of vulnerable road users.

The fact that Cambridge's roads are narrow is precisely the reason why close-passes are a problem here and action should be taken against them. Cambs police contradict Highway Code rule 163 'Give vulnerable road users at least as much space as you would a car'. The accompanying image is clear: you should wait until the opposite carriageway is clear to overtake if there isn't space.

Given the express intention of the police not to safeguard vulnerable road users, we suggest people cycling follow Bikeability training guidelines and cycle centrally in the lane on narrow roads, to prevent the kind of dangerous overtakes the police refuse to take action against.

We have seen that Cambridgeshire Police have been very reluctant to enforce 20mph despite the proven benefits for road safety in other towns and cities. We see them once more refusing to take action that is proven to protect vulnerable road users because they do not wish drivers of motor vehicles to be delayed whether in the city or out on the country roads of the county.

Al Storer, trustee of Camcycle, says:
"The new Bikedata website from Cyclestreets (https://bikedata.cyclestreets.net/collisions) shows that in Cambridgeshire almost all cycle fatalities and serious injuries occur outside of the city. From personal experience it is very common when cycling on country roads to be passed at high speed very closely by drivers, even though there is usually nothing coming the other way and plenty of width to the road. It is this sort of driving that can very easily kill and the sort of behaviour that West Midlands Police have been successfully targeting."

This is in response to Cambridgeshire Police's statement, which was as follows:

"We have been liaising with officers in the West Midlands about Operation Close Pass and have explored the possibility of implementing something similar locally.

"The average road is approximately 3.5 metres from the kerb to the white lines. Cyclists are advised to cycle 0.75 metres away from the kerb to avoid drain covers and an average car is about two metres wide. Operation Close Pass recommends drivers leave about 1.5 metres when passing a cyclist. If we add all those figures together it would mean drivers are moving into the opposite lane to overtake.

"For Cambridge city where roads are narrower and often very congested we would be potentially forcing motorists to drive at the speed of cyclists when there isn’t the recommended space to overtake.

"Cyclists are vulnerable road users and it’s important that we are doing all we can to make the roads safer for everyone but at this time we don’t believe Operation Close Pass in its current format is practical in Cambridge."

“Cambridgeshire police’s decision is very disappointing. Not only does it demonstrate a lack of understanding of the Highway Code’s guidance on overtaking people cycling, Rule 163, but it also seems to prioritise the inconvenience of one road user over the safety of another.

"Despite reaching out to Cambridgeshire police and offering a free close pass mat, similar to those used by West Midlands Police in their operation which has seen a 20% reduction in killed and seriously injured vulnerable road users over the past year, we've still not heard back from them. Cycling UK would urge Cambridgeshire police seriously to rethink their position on close passes, as clearly in a congested city like Cambridge, they are a problem, and need to be addressed if they are truly serious about keeping cyclists safe."

The Police and Crime Commissioner issued a statement on October 9th, following the significant attention to Cambridgeshire Police's decision. The PCC's statement fails to address the issue.

Below is my response to the decision by Cambridgeshire Constabulary not to rollout Operation ‘Close Pass’.

As Police and Crime Commissioner, my job is to protect all road users, whether car users, cyclists or pedestrians. That is why I support a multitude of different safety initiatives.

There are 6,000 roads and streets in Cambridgeshire and the police cannot be (and never have been) on every single road. With ever-reducing budgets impacting on police resourcing as well as on other bodies, it is more important than ever that we work together to find new solutions to keeping all of our road users safe.

People need to take a sensible approach to overtaking cyclists and I’m pleased to see the majority do. The code is clear – don’t get too close to the cyclist you intend to overtake, use your mirrors and signal when it is safe to pass, allow plenty of room without putting other users at risk.

My first priority is to reduce road deaths in our county, fatalities which are primarily car drivers caused by other people driving dangerously or inappropriately. That is why earlier this year I invested in a Casualty Reduction Officer. Jon Morris has years of experience in dealing with these issues and continues to work on a daily basis with a wide range of statutory and non-statutory agencies to help educate all road users about keeping safe. One such scheme is Speed Watch which I’m pleased to see now has over 2,000 volunteers. I would encourage anyone in any parish who wants to set up a scheme to contact Mike Brooks, the Force Watch Coordination Officer: mike.brooks@cambs.pnn.police.uk.

Another initiative is the introduction of Drive iQ which I introduced in June this year. The web-based learning programme is helping educate young people how to keep both themselves and others safe while driving.

It is clear that enforcement alone will not reduce fatal and serious collisions and it is vital the police focus work on preventing them from happening in the first place.

In response, we issued the following statement at lunchtime on 10th October:

"The PCC's statement does not address why the Casualty Prevention Officer, in a role the PCC created earlier this year, told motorists that obeying Highway Code rule 163 was impractical. This is a very serious statement from the officer whose responsibility it is to reduce casualties. We urge the PCC to issue a statement as soon as possible that clearly states that the comments from the Casualty Reduction officer were incorrect and to provide instructions that are clear, correct and safe for drivers to follow when passing cyclists.

The Cambridgeshire and Peterborough Road Safety Partnership, to which the PCC is a partner, has set the goal to reduce the number of cyclists and pedestrians killed or seriously injured in collisions by at least 40% between 2015 and 2020. The PCC does not offer a single solution in his statement to reach this target.

The PCC says enforcement alone will not prevent casualties, and yet West Midlands Police have seen a 20% casualty reduction in one year as a result of Operation Close pass, which is an initiative focused on enforcement. It is not the only tool available or the only one that should be used, but the PCC seems reluctant to use enforcement at all. Operation Close Pass is aimed at prevention by targeting those behaviours that are dangerous before they result in a casualty." 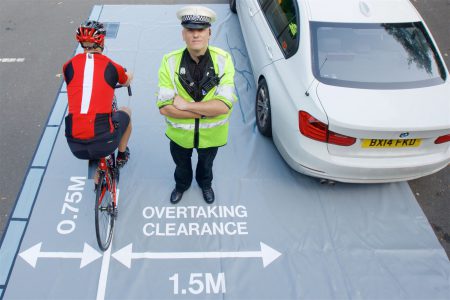