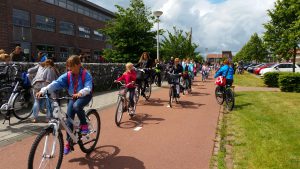 We know that Cambridge is the leading cycling city in the UK, but when it comes to the cycling rates of the Netherlands we fall short.

Local cycling campaigners have been calling for Dutch standards of infrastructure in Cambridge for years and now we have the opportunity to learn from the Dutch just how that can be done.

Camcycle is hosting a public meeting on Tuesday 2 May with 4 experts from the Dutch Cycling Embassy. Led by Erik Teterroo the Embassy’s country representative for the United Kingdom, attendees at the meeting will have the opportunity to hear from these experts about how the Netherlands is planning to further increase their impressive rates of cycling. These plans are outlined in the Bicycle Agenda 2017-2020 drafted by the “Tour de Force”, a partnership between governments, market, civil society organisations and research institutes. The agenda aims to increase the number of kilometres cycled in the Netherlands by 20 percent over the next decade.

While in Cambridge the Embassy will engage with cycling stakeholders and tour our best (and worst) examples of cycling infrastructure where campaigners will be keen to hear their ideas for further improvement.

Roxanne De Beaux, Cycling Campaign Officer for Camcycle said “Camcycle is looking forward to the visit from the Dutch Cycling Embassy. I first invited Erik to Cambridge a year ago and I am pleased to see he has accepted this invitation and that he is bringing his colleagues with him. We’re looking forward to showing off some of the great infrastructure we have here in Cambridge and also to get some creative ideas for solving some of the trickier areas.

I think our Dutch friends may be surprised at just how much cycling we have here in Cambridge.”

The meeting is open to all and will be held at Friend's Meeting House on Jesus Lane. Doors open at 7.30pm for an 8pm start.

The Cambridge Team:
Erik Tetteroo
The Embassy team will be lead by Erik the Embassy’s country representative for the United Kingdom. Erik’s main interest lies in the interaction between city development and bicycle-inclusive mobility with a key focus on the role of bicycle-train systems in urban regions. As a former architect, Erik attaches great value to attractive design solutions and the quality of public space.  He is the main cycling policy advisor for the Dutch Ministry of Infrastructure & Environment.

Richard ter Avest
Richard is a mobility planning and design professional. His expertise lies in organising cities in a bike – and pedestrian – friendly way by also taking into account public transit, car infrastructure and public open spaces. Richard has introduced innovative and sustainable solutions to improve livability and accessibility in cities and regions.

Rob van der Bijl PhD
Rob is an urban planner, independent consultant and cycle expert with an Amsterdam-based office known for its innovative approach to research and design. His projects are characterised by a multidisciplinary approach at the intersections of urban planning, transport, culture and technology.

Jose Oudijk
Jose is the programme manager for the Dutch Cycling Embassy and organises events and manages communications. As a typical Dutch person, she cycles at least 20kilometress each day to get herself from A to B.