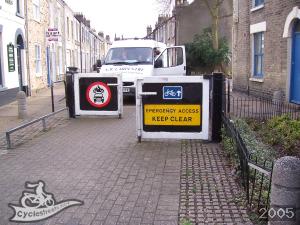 The gates at Hooper Street, Gwydir Street and Rustat Road have been really successful at removing rat-running vehicles from these residential streets, and making the places quieter, and safer for walking and cycling. However the gates themselves can make it difficult to get through, especially on non-standard cycles such as cargo bikes, tricycles and with trailers. These type of cycles make it possible to replace more driven journeys with cycled ones. Replacing the gates with a removable bollard would reduce conflict at these pinch points, while still allowing access for emergency vehicles. There is a broader issue that chicanes and badly-positioned bollards across the city exclude rightful users of routes: not just cycles, but also people with wheelchairs and prams. To make the most of safe routes away from cars, all users need to be able to access them, including the most vulnerable. This is why we are about to launch a campaign against obstructions like this on on off-road routes at https://www.camcycle.org.uk/campaigning/issues/bollards/

(issued to Cambridge News on the subject of the gates at Hooper Street, Gwydir Street and Rustat Road, as discussed at East Area Committee last Thursday 6th April)