Camcycle (The Cambridge Cycling Campaign) is well aware that current access to the new Cyclepoint Cycle Park at Cambridge Station is not satisfactory. However, we are also well aware that access should improve as building works are completed. Nevertheless, we suggest that more could be done, in the short term, to make it easier and safer for cyclists, including those unfamiliar with Cambridge, to access the Cyclepoint. In particular, signage is needed to direct cyclists to the Cyclepoint along the safest possible routes. Traffic management by the developers must be improved and Police should be in attendance a peak times to ensure people are driving their cars safely.

People accessing the Cyclepoint from the south have two options. One option requires navigating Station Road which is busy with motor traffic, buses, taxis and construction vehicles, often with hostile drivers and/or poor traffic control. The other is to dismount from the cycle, cross the busy and confusing taxi rank and then wheel the bike  through narrow gaps in the railings, then through the people in the taxi rank queue and then against the flow of peak time commuters through a narrow walkway. 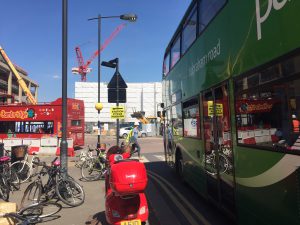 Spot the sign, dismount or navigate around buses, head in the opposite direction from the station through construction traffic…. and then you might find the Cyclepoint.


Camcycle officer Roxanne De Beaux commented on her experience with the Station. “I was actually shocked at how bad the situation to the south of the Cyclepoint was. I visited during the middle of the day and experienced poor traffic control with one of the workers on site directing a car to reverse into me while I waited patiently out of the way. On Station Road a large lorry with no traffic control blocked the road and again started reversing with no warning. I was stuck between the lorry and traffic behind me and had to quickly move onto the pavement to avoid being run over. It took me about 10 minutes to get from the Cyclepoint to the entrance of the station via Great Northern Road and Station Road. I am a confident cyclist and I knew where I was going however I found the journey difficult and dangerous. It is easy to see why people do not try to traverse this section with their bikes during peak times.”


Access from the North is also challenging. Again cyclists must mix with speeding drivers heading in both directions on the single lane Devonshire Road or use the Carter Bridge which has had unattended construction work for several months. Recently concrete bollards were installed on the bridge in an inappropriate location and with insufficient width for non-standard cycles. Camcycle has been working with the Council to ensure these bollards are made safe. They were installed without notice by the CB1 development. 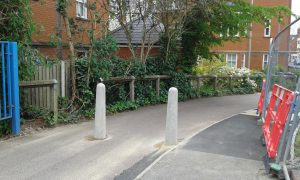 The bollards on Carter Bridge to the north of the Station. Photo courtesy of Monica Frisch.


It is not just users of the cycle park that are affected by the construction work as this route forms part of several significant cycle routes to and from the city and the busway cycleway.
Camcycle are in regular contact with Abellio about progress on making the area around the station safe and accessible. They have been informed that the areas under Abellio control will continue to be improved over the coming weeks, however the majority of the work is CB1 construction and this is set to continue for a much longer period of time. Despite longer term plans for improvements it is essential that short term action is taken to ensure the safety of people who are walking and cycling in the area.


There are also concerns about the dangerous layout of the Tenison Road and Great Northern Road junction as a high number of near misses have been reported to Camcycle within the few months it has been open. Traffic levels on this Road are likely to increase in the coming months with further changes to the area.