The proposed junctions published for the Milton Road City Deal scheme do not do enough to ensure the safety of people of all ages cycling.

Cambridge Cycling Campaign proposes a junction design that is safer, and may even increase capacity for motor vehicles.

Junctions are the key feature of road design, as this is where collisions most often happen. In particular, the junction of Milton Road and Elizabeth Way is in the top ten most dangerous junctions in Cambridge for cycling.*

While the City Deal proposals to replace the existing roundabout with traffic lights might result in improvement, it still involves people on bikes sharing space with motor vehicles, and the potential for conflicting movements. Proposals for advanced stop boxes and ‘advance green’ signals are not enough**, and will not provide sufficient security to encourage people new to cycling, or parents travelling with children, to feel safe on bikes.

Campaign Chair Robin Heydon has simulated a fully separated junction for the Elizabeth Way / Milton Road junction***. In this model, people on bikes are separated both in space and time from motor vehicles, moving only when other traffic is stopped. Pedestrians also have their own crossings and space. The principles could be applied at other large junctions too, such as the junction of Milton Road and Kings Hedges Road.

Micro-simulations indicate that this model moves twice as many motor vehicles as the light-controlled crossing proposed in the City Deal documents, benefitting all users. 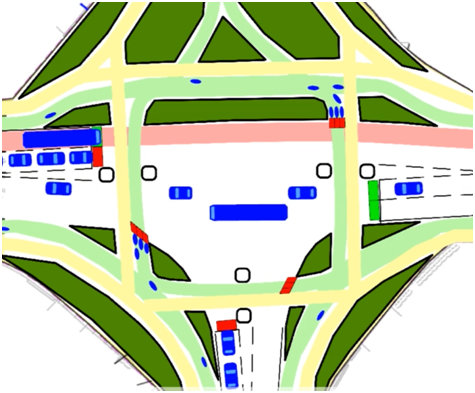 Full simulation and comparison with City Deal proposals are at: http://www.camcycle.org.uk/blog/2015/10/23/milton-road-elizabeth-wayjunction-proposals/

The design reduces complexity for drivers, by separating people cycling from motor vehicles. It means that most people won’t be cycling on the road in front of cars, trying to merge from a left-hand cycle lane, or travelling on the inside of turning traffic.

Robin cannot, alas, take credit for the idea: it is standard in other countries. For many years such junctions have been used, and used safely, by children cycling to and from school on their own, or older people on electrically assisted bikes and mobility scooters.

Robin says: "We would like the junctions to be world class. By that we mean allowing everybody to ride through the junction without the fear of being hit from the side by a car driver distracted by Facebook, or being crushed under the wheels of a heavy goods vehicle driver who cannot see you. Simply put, roundabouts are dangerous for people riding bicycles, and also for people walking. Fully segregated, protected junctions are the safest. Importantly, there are no advanced stop lines, no advanced cycle traffic lights. Everything is safe, more space is given to queuing traffic, and more time is given for moving traffic."

The City Deal team needs to be looking at best practice achieved elsewhere to give more people, of all ages and abilities, a genuinely safe option to cycle.

Cambridge Cycling Campaign will be among the participants putting forward a vision for Milton Rd at Milton Road Residents' Association meeting this Thursday, 21st January, at Chesterton Community College, 7.30pm. The City Deal proposals for Milton Road are at http://www.cambridgeshire.gov.uk/citydeal/info/2/transport/1/transport/8

*By number of collisions involving people on bikes 2005-2011.
**Advance green signals mean that people on bikes can move off before other traffic, and can be found in Cambridge on Hills Road and Castle Street. However, this only helps if traffic is stopped and stays stopped as you arrive. Advanced stop boxes (cycle space at the front at traffic lights) encourage people to cycle up the inside of vehicles in order to reach the box, where vehicles can move off just as people are in a blind spot, or leave people stuck on the left-hand side of the road when they need to be positioned for a righthand turn. Drivers can still turn across people cycling, or leave cyclists trying to merge with 30mph traffic at busy junctions in order to turn.
***The simulation takes as its basis the City Deal proposed closure of Highworth Avenue, but would work as well if it remained open.