Junctions are the primary location where cyclists experience fear and uncertainty about how they can safely negotiate traffic. In the most extreme cases, no provision has been made for cyclists at all, and motorised vehicular traffic has complete priority.

Some junctions promote high speeds for traffic by assuming that bicycles will be safe moving around the outside of these roundabouts at 10mph while cars move around at 40mph. High differences in speed promote risky behaviour by both bicycle riders and car drivers.

The junction between The Fen Causeway / Trumpington Road / Lensfield Road is probably the worst junction in the city for cyclists, with a poor collision record. Something radical needs to be tried out at this junction to make it safe for cyclists. This junction has been slated for traffic lights before but concerns about reduced traffic flow have meant it has not been improved, even though modern traffic control technology would work much more effectively than the lights of former decades. In other locations similar changes to the road layout have been made, the congestion has not gone worse; instead traffic has often evaporated away as people adapt to changed circumstances. 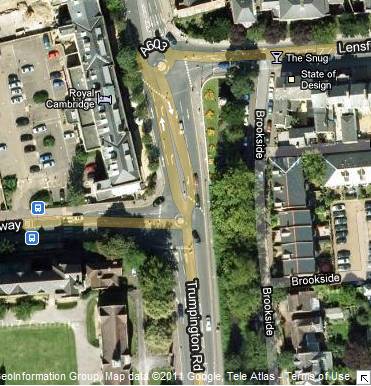 The junction is currently a double roundabout with up to four lanes for cars, and no space allocated distinctly for cyclists or pedestrians. The dominant flow for cars is from the west to the east, and from the south to the west or east. There is very little flow north by cars at this junction as a result of the recent core stage four improvements.

It is therefore proposed that the left turning entrance roads to each arm of this junction be changed from two car lanes to just one car lane and one bicycle lane, that the roundabouts are removed, and smart traffic lights are installed that ease the flow of all traffic. Left turning cycle traffic should never need to be stopped by a traffic light, perhaps through use of a filter. This would mean that only straight on and right turning bicycles would have possible conflicts with cars. To help resolve these conflicts, bicycles should be given an advance green of 5 seconds, so that they can clear the junction before cars start moving. The cycle lanes should also be continuous through the junction, so left turning cars coming from the south have to give way to cyclists going north. It is more important to give bicycles plenty of space than create two traffic lanes. The raising of the cycleway up a couple of inches, requiring the cars to go over the cycle lanes would further emphasise that cars should give way to bicycles at this difficult location.

This is arguably the second-worst junction in the city for cyclists. It treats walkers and cyclists as second class citizens, expecting them to use an underground labyrinth. The current monstrosity would never be considered if this area were being designed today.

Instead, an at-grade junction must be built that provides an excellent pedestrian, cycling and public transport junction that also caters for motorized vehicles.

If this junction was converted to a 4-way traffic light control, the space that is currently being used to accommodate the large roundabout could be re-used to provide additional bicycle parking, or development opportunities (such as space for more houses) to fund the changes.

The Regent Street / Hills Road / Gonville Place / Lensfield Road junction is a hostile environment for all users of this junction. Pedestrians in particular are treated poorly and the whole junction is a poor gateway into the city.

This junction must be improved for the benefit of all users of this area. 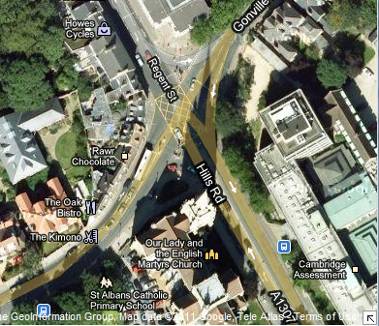 Pedestrian traffic from the railway station into the city centre is high, yet it is currently forced to negotiate uncontrolled crossings and narrow holding pens. Changing lane widths here on the Hills Road side would be a sensible start, and reductions of lanes need to be considered for the other approaches. In short, reallocation of roadspace.

The Coldham’s Lane roundabout with Brooks Road and Barnwell Road is a major barrier to increased levels of cycling through this part of the city. The roundabout has a 40mph speed limit with a very wide roadway. 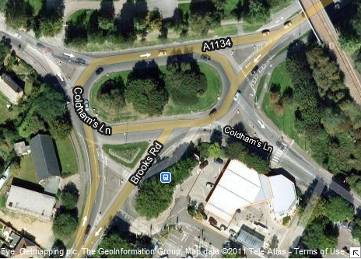 The obvious solution at this location is to create two roundabouts, one inside the other. The inside roundabout would be for motorized vehicles. The outside roundabout would be for cyclists (and include paths usable by pedestrians). This type of roundabout is very popular in countries with high cycling modal shares like Holland and Denmark. The points where the cyclists and motorized vehicles meet would either need to be signalized, or provide priority to the bicycles. 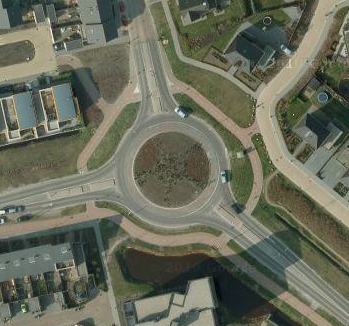 Despite improvements in 2003/4 to mitigate problems experienced by cyclists here, the area remains a hostile late-1960s racetrack with a poor public realm. 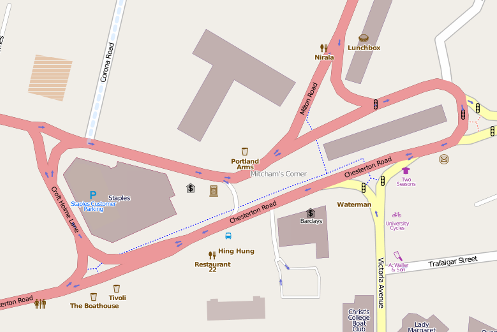 Only removal of the gyratory and reversion to a signalised junction would really address the problems here. 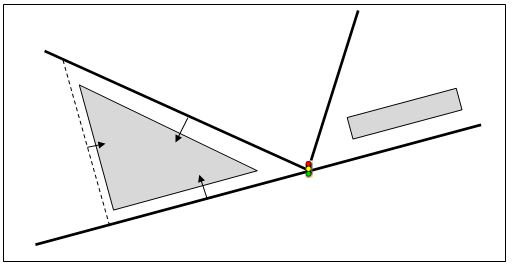 Replacement of Croft Holme Lane with a pedestrian/cycle path could enable some land to be reclaimed to the west of the current Staples site. It would also make the current retail site more easily accessible.

We think the authorities need to consider the possibility of a S.106 agreement to fund rearrangement of the surrounding highways in exchange for a land swap which would enable a developer to reclaim the land to the west.

There is a cycleway along the north of Newmarket Road that crosses Ditton Lane without any provision for cyclists using this junction. A safe crossing for cyclists, and pedestrians, at this junction needs to be provided.

The primary flow through this junction for cyclists is from Mill Lane through Pembroke Street to Downing Street. The recent core stage four changes have significantly reduced the volume of private motor vehicle use in the area, the priority should be given to bicycle movements in the area as this is now the dominant vehicle flow. Therefore, the junction should be changed to make the main road continue from Pembroke Street to Mill Lane, linking the cycleway from Newnham and the West Cambridge area to the City Centre area.

The Horningsea Road / A14 junction has a wide cycleway on the west side of the road but no priority over car traffic travelling at up to 60mph that is turning onto the A14. A toucan crossing should be installed at this location, with bicycle detectors to allow the lights to turn to green for the bicycle before they arrive at the lights. 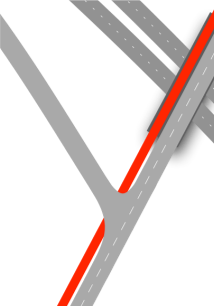 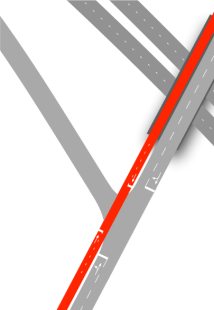 The entrance ramps onto the A14 from the B1049 (Cambridge to Histon) have no priority for cycles crossing in front of motorised vehicles. A toucan crossing at this location would immediately solve the safety problems without causing tailbacks on to the A14 (the excuse often used for not doing this). In addition, pedestrian and cycle facing lights should be added to the lights at the top of the exit ramps, so that users of the cycleway can tell when it is safe to cross, especially when travelling against the traffic flow. Additional engineering could be done later to completely separate the cycling traffic from the high-speed motorized vehicle traffic. This additional engineering could take the form of a cycling tunnel under the A14 along the line of the old Cambridge to Histon road. 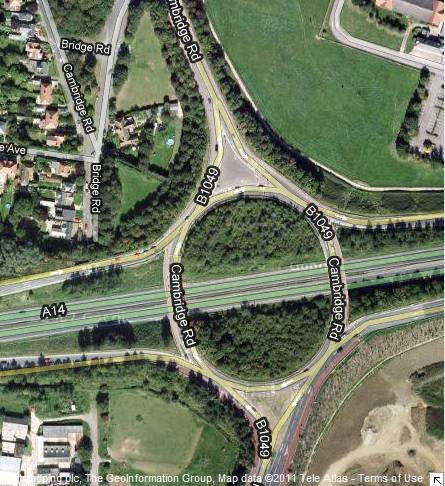 This improvement would link two of the largest villages, Histon and Impington, with the new developments on the northern edge of Cambridge and with the City centre.