We get many enquiries from Local Authorities around the UK asking about the cattle grids used on Cambridge cycle routes. They are an excellent alternative to bollard arrangements.

Fabrication and installation costs less than £4,000 per site, including VAT. In our view this is a cheap way to make a big improvement to cycle routes, in a way which is universally welcomed. 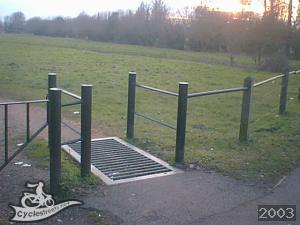 Many cycle routes within Cambridge cross commons which are grazed by beef cattle all the way up to finishing weight. For the last 10 years the Local Authority has installed its own design of cattle grid on these routes, with around 30 installations now in place. The narrower spacing of the bars make them comfortable to use and particularly suitable for use on cycle routes. Experience has shown that the grids create an effective stock-proof barrier and there have been no reported incidents with cattle.

Use of grids has been one of the most popular innovations made in Cambridge – as previously cyclists had to negotiate dozens of squeeze gaps and pinch points, which was inconvenient for most and impossible for trailer users.

Whilst there have been some minor problems with human injury, these occur very infrequently and have been much reduced by recent modifications. Most problems used to involve slipping on the bars when wet. In view of this, good design involves, wherever possible, not putting grids where cyclists are turning or braking. Similarly, designers should avoid locating grids where cyclists might need to stop – a small child might put a foot down between the bars. Good practice is therefore to provide a swing gated pedestrian bypass and to give a space where a cyclist can stop clear of the grid itself. That said, in practice most adults tend to avoid the pedestrian bypass and gingerly walk over the grid – even runners do so!

One very successful modification has been to replace the plain bars with threaded rod. This does not shred tyres (the galvanising seems to blunt the edges), but gives a big improvement to the purchase given to the bike wheel. The Council get far fewer complaints since adopting this feature and recommend its use.

It is worth noting also that cattle are sometimes near cyclists on the paths through the commons of Cambridge (without any kind of protective barrier) and we have never heard of any problems with this interaction.

The CycleStreets Journey Planner website has lots of photos of cattle grids which members of the public have submitted.

Material on this page has been partly sourced from Cycling England’s website.