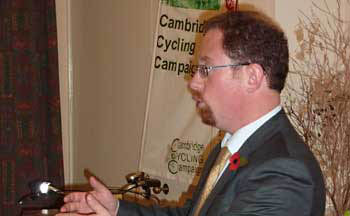 Dr Julian Huppert, MP for Cambridge, entertained over fifty members of the Campaign with an informal but informative talk about campaigning for cycling. He started by congratulating the Campaign on being a fantastic organisation before explaining that some MPs do cycle and that it is a great way of meeting people. He is the co-chair of the All Party Group on Cycling, which organises meetings with speakers on a whole range of issues, bike rides and an annual study tour, which this year was in London. He leads for the Lib Democrats on transport policy, which includes campaigning against higher rail fares and becoming expert on coastguards – an issue that does not affect Cambridge much. He tries to push things in parliament and secured an entire adjournment debate on cycling in England. In addition, Bikeability has been saved and getting ‘no entry except cycles’ signs is real progress.

He talked about issues around safety, noting that it is possible to cycle in an unsafe way. He also told us that the Government is not considering mandatory helmets. He feels that the SMIDSY (‘sorry mate, I didn’t see you’) line is used too much and that sentences are sometimes far too light. He said he is keen on proportionate liability, which he sees as a workable idea, and would like to see more in the driving test on cycling and more driver education on cycling. He reported that the Lib Dems are pushing for 20mph areas, making creating them more straightforward and cheaper, and areas should be designed to make cycling easier. It needs investment to do all the small things that make a difference. He ended with a quote: ‘she who masters cycling masters life’.

Among the topics raised in questions were longer lorries, which are going to be trialled in limited numbers – 900 longer lorries – for ten years. He will ask whether these longer lorries will be restricted to certain routes. He noted that Crossrail insists on delivery vehicles having modern mirrors, proximity sensors etc, perhaps as a condition of funding, and wondered whether the city council as planning authority could insist similarly as part of planning conditions. He reported that the coalition agreement with the Conservatives calls for road user charging for HGVs and that this is supported by the haulage industry.

He is optimistic about getting improvements to cycle parking at Cambridge station soon, noting that Abellio, a subsidiary of the Dutch state rail operator, has won the Greater Anglia rail franchise for just over two years. They will take over the running of services out of London Liverpool Street into Essex, Suffolk, Norfolk and Cambridgeshire from early February. Apparently Abellio have already sent someone on a study tour of Cambridge.

On motorway speed limits he noted that the current 70mph limit is not enforced. He feels that 80mph if enforced might be acceptable but expressed concern that enforcement is decided by the Association of Chief Police Officers, especially as this is a private limited company and thus beyond the reach of the Freedom of Information Act. Lower speed limits on unclassified roads were suggested, which he felt was an interesting idea. It was commented that cyclists in country areas are getting more isolated because of fast traffic on poor rural roads.

It was agreed the meeting was quorate and Martin Lucas-Smith, chairing the meeting, reminded us that non-members are not entitled to vote.

It was noted that Tim Burford was (and is) not the Co-ordinator. On page 2 in paragraph four the gender split should be 59% male, 41% female. With these corrections the minutes were approved.

Martin Lucas-Smith presented his Co-ordinator’s report and review of the year, highlighting some of the many activities.

Chris Dorling presented his treasurer’s report, which was included in the AGM papers. It covers a period of 54 weeks, from when the Campaign became a charity on 16 September 2010 until the end of this September, and shows a surplus of £2,167. The accounts were approved.

David Earl presented the report on membership which was included in the AGM papers. There had been very little change from last year. The stall on Parkers Piece had been very successful in recruitment terms.

Monica Frisch presented a verbal report on the Newsletter and thanked all who contributed to it.

Simon Nuttall gave a report on this year’s events, primarily the Reach Ride.

Elections for the Committee

There were ten posts plus five general campaigner posts to be filled. The results were:

There were six candidates for the five general campaigner vacancies. The five who were elected are Klaas Brümann, Heather Coleman, John Hall, Vanessa Kelly and James Woodburn.

Julian Huppert joined us for a lively discussion afterwards in The Maypole!