Chicanes are used on the cycleway alongside the Busway to slow down cyclists as they approach roads which have to be crossed. They have serious snags. Although they do slow down cyclists, they bring them into direct conflict with pedestrians and oncoming cyclists. More important still, they distract cyclists – especially the inexperienced – from giving their full, undivided attention to the road ahead that they have to cross.

A much better alternative, widely used in the Netherlands, is to have well-marked cycleway humps (see illustration below) rather like the road humps used to slow down motorists. These may well slow down only fast cyclists but that, after all, is what is needed. What they certainly will do, if properly installed, is to alert all cyclists to the crossing ahead. 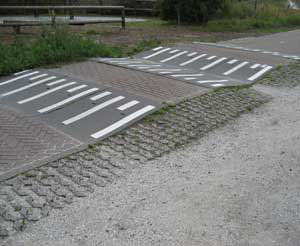 If we must, for the present, keep the chicanes they must be made more visible. But we should start pressing now for their replacement by well-designed humps like the Dutch ones.

Padlocked, removable bollards are used to deter unauthorised motorists from using cycleways. The bollards used are highly unsatisfactory mainly because they are almost invisible not just in the dark but even in poor daylight, mist or rain. In darkness a particular hazard when approaching bollards on a bicycle is being dazzled by full-beam (not dipped) guided-bus headlights or even by the very bright lights of oncoming cyclists. We have already heard of cyclists crashing into the bollards. And of course they are not even very visible to the motorists they are supposed to deter. I think we should regard improvements to make them more visible as only interim measures and should seek to get the bollards replaced before anyone is seriously hurt. 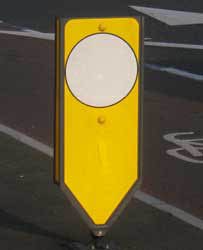 My suggestion is that they should be replaced by a double-sided version of the flexible, fluorescent bollards that have in recent years been used in Cambridge to mark traffic islands (see illustration to the right). These have obvious advantages:

It might be argued that delinquent motorists might simply drive over flexible bollards. I think that in practice there is not likely to be any greater risk that this will occur than that such motorists will crash through the existing bollards. These certainly wouldn’t stop a determined driver.

The fundamental issues with both the bollards and the chicanes are directly to do with safety and for this reason should be treated as priorities. Obvious sources for funding or part-funding are Section 106 levies on the many new developments served by the excellent new cycleway routes on which the bollards and chicanes have been installed.