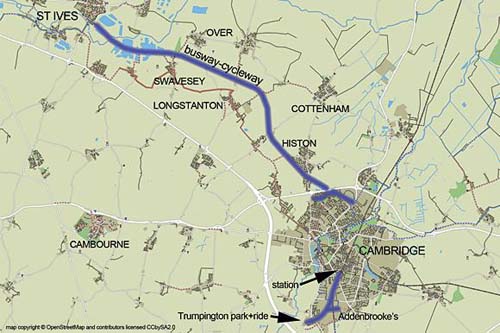 The County Council has announced that both the southern and northern sections of the Busway plus the cycleway will open on 7 August. We plan a ride along it on that Sunday (see article). The new road to the station will open at the same time (see later in this Newsletter). The cycleway west of Swavesey will remain closed until later in the autumn so that the flooding section just west of the Ouse Bridge can be raised (this doesn’t affect the buses).

The County Council has also agreed to tarmac the final remaining section from Swavesey to St Ives at the same time, something we were previously told ‘cannot be done because of Environment Agency objections’. The money for this appears to have come from Sustrans. We don’t want to appear churlish about this but on a project costing over £150 million, not to be able to finish the cycleway aspect of it without funds from a charity seems so sad.

As Jim Chisholm says in his article later in this Newsletter, the quality of the new route is excellent. It would be good to think that this will raise the bar further for what is possible elsewhere in the area.

The one remaining issue is flooding. According to the County Council, the path is still expected to flood for a few weeks each year in the area around the river. They say the Environment Agency will not permit a higher path because of the way it would change the hydrology. However, that’s what they said about the tarmac too.

The incorrectly constructed section with gross flooding is to be repaired using what the council is calling a Dutch Culvert (see diagram adjacent). This consists of a series of 60cm diameter pipes laid side by side at right angles to the path with the tops filled in and a flat surface laid across them all. This means that water can disappear under the path. Quite what is so impossible about using say 80cm pipes instead (which would presumably drain more water, not less) is a mystery.