Back in 2006, we launched a ‘Photomap’ on our website, enabling anyone to add photos of cycling-related problems and good practice to a map, and use these as a basis for campaigning activity. Almost five years on, the Photomap (and cycle journey planner) have become a national project – in the form of CycleStreets – and some 30,000 photos have been added.

The Photomap has tended to be a bit of a ‘sink’ for problems. Sometimes it’s just been a useful way of letting off steam and logging an issue. Yet it has the potential to link much more closely with our campaigning work. At a discussion day in March, the Cambridge Cycling Campaign Committee considered – not for the first time – how to make the Campaign run more efficiently. 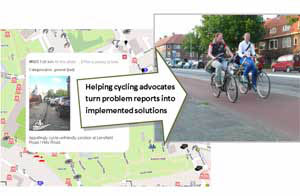 We suffer from the typical problems of many local voluntary groups. For instance, we have lots of enthusiasm, but turning this into actual activity is hard. We have monolithic e-mail lists that are not well-tuned to getting more people involved and ensuring that problems are turned into solutions. We have much more than we can currently deal with. We have difficulties in prioritising what to work on. And we often miss out on issues, learning about them when it’s too late.

The Photomap forms a massive database of problem reports and examples of good practice. It could be turned into an incredible campaigning resource that enables groups like ourselves to prioritise, discuss, and manage these problems, to make our existing campaigning work much more efficient and effective.

CycleStreets recognised this situation. Talking to other groups around the country, including in London, it became very clear that the same problem exists elsewhere. Campaign groups need support to help their campaigners work quickly and easily.

CycleStreets submitted a bid to the Ordnance Survey’s ‘GeoVation’ fund, to enable the development of a wide-ranging campaigner toolkit. The Campaign enthusiastically supported this bid. The proposal was a winner in the GeoVation contest! It brings £27,000 for the development of a toolkit which, in the words of one campaigner from London, should be ‘a hugely important step forward for all cycle campaigning groups’.

The bid was one of 155 ideas submitted to the GeoVation challenge, on the theme of ‘How can we improve transport in Britain?’. The bid was shortlisted, and Martin Lucas-Smith and Simon Nuttall (CycleStreets’ routemaster) attended the GeoVation Camp in March to help develop the proposal, amongst a total of 30 ideas invited. It was one of the final ten proposals that got through to a Dragon’s Den-style pitch in May. CycleStreets was one of six winners who share the £160k pot of funding.

GeoVation is run by the Ordnance Survey, and uses funding from the Technology Strategy Board, Ideas In Transit and the Department for Transport. It runs challenges to address specific needs within communities, which may be satisfied in part through the use of geography.

‘We were delighted to be picked by the Ordnance Survey’s judges as one of the winners. The £27,000 of funding will enable us to get this much-needed project off the ground. As a member of one of the many local cycle campaign groups who will benefit, I’m all too aware of the large number of issues on the street network that need improvement, and the difficulty of managing this deluge of problems. The new system will help campaigners around the country convert these problem reports into prioritised, evidence-based solutions. It should help them work more productively with local councils to see changes implemented.’

The bid has the support of groups around the country. As well as ourselves, this includes the CTC, Cyclenation, London Cycling Campaign, and other smaller campaign groups.

In the coming months CycleStreets will be working to provide a really useful and user-friendly system that will save a lot of time and effort.

Some of the things the new system will be able to do are:

These and the many other ideas that will be included within the system should lead to a very considerable change in the way the Campaign operates, from later this year.

We should see a massive increase in our capacity to deal with a large number of issues, as well as the ability to get many more people involved much more easily in campaigning for improvements to the streets we cycle in. The eventual result will be better streets for cycling.