﻿ After very many years of campaigning, Gilbert Road at last has cycle lanes worthy of the name. Thanks to members of the Campaign’s Gilbert Road Subgroup who worked hard on this, and to the cycling officers at the County Council whose time on it has been considerable. 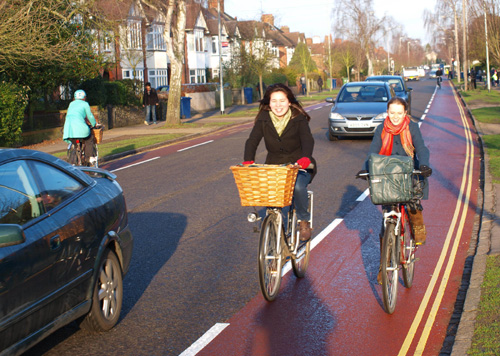 In February 2011 Cambridgeshire County Council had the broken white lines and double yellow lines painted onto the shiny new red-mac Advisory Cycle Lanes on Gilbert Road and by Valentine’s Day many cyclists were using the continuous, 1.70m-wide lanes, some even riding in pairs.

Cycling along Gilbert Road is now much more pleasant, faster and feels safer – why did it take so long?

According to a report in the Cambridge News, Chesterton Community College has ‘held assemblies to discourage students from riding on the pavement’.

To celebrate the opening of the cycle lanes and to provide advice on cycling, Chesterton Community College held a Cycling Fun Day on Saturday 19 February 2011, organised by Cycle Cambridge.

The County Council is expected to carry out a traffic survey in a few months’ time and Cambridge Cycling Campaign is looking forward to an evaluation of the project and possible solutions for the concerns raised.

Cycling along Gilbert Road is now much more pleasant, faster and feels safer. It begs the questions, why did it take so long and why we can’t have more proper cycle lanes in Cambridge?