Construction of the new cycleway between the railway bridge near the Holiday Inn and the bridge at Burnside was going really well – until they tried to replace the bridge over the brook. Embarrassingly, wires have got crossed somewhere and when the bridge was lowered into place on 15 March, it didn’t fit – it was about 40cm too long and didn’t line up properly with the abutments. These will have to be cut out and re-laid, so sadly the scheme will not, as planned, have opened by the time you read this.

For years the Campaign and former Councillor Chris Howell has been pressing for the construction of this missing length of pavement at the Rustat Road end of the Station Cycle Bridge. We are pleased that work is now underway. This should mean that pedestrians no longer walk in the cycleway. 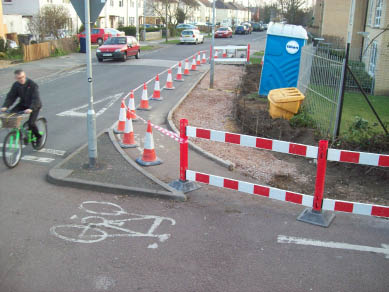 Improvements between Perne Road and the Robin Hood junction on Cherry Hinton Road are still underway at time of writing. Inbound 1.5m cycle lanes have been installed now and are continuous between the two including across all inbound junctions. The treatment of the rest of the road is interesting: a centre line has only been used at junctions. The intention is to avoid pushing traffic too far towards the cycle lane in what is quite a narrow remaining space – in Cambridge terms this is quite radical. It should also reduce the ‘Milton Road effect’ of cycles using the road in the other direction being intimidated. Outbound, the pavement cycleway has been widened in places, and speed tables are to be installed at junctions. Inital impressions are that the surface is terribly bumpy. 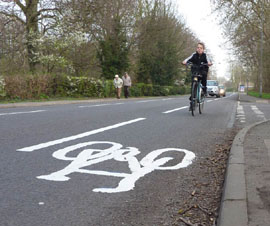 UK Power Networks are going to be digging up streets in the city centre over the next few months. Expect traffic coming from unusual directions, and diversions and closures while this happens. We have specifically requested that the surface be relaid properly.

A cycleway from the northern edge of Fen Ditton to the southern edge of Horningsea has been opened. A key part of the scheme was canned by councillors when they withdrew funding for a signalled crossing of the A14 slip road, so the scheme is only a shadow of what was intended. See article in this Newsletter.

The upgraded cycleway along Madingley Road is complete. Sadly, like the Horningsea scheme, it has not lived up to expectations. The outbound part of the scheme has been dropped entirely, the inbound part starts late and ends early, and access from a major side road is not possible. Essentially, all that we’ve ended up with is a very expensively widened pavement on one side. A sad tale, expanded on in the full article.

Readers who receive paper copies of this newsletter should find a new map enclosed (and we should have a link to an online version as well). The Central Cambridgeshire Cycle Map, published by the County Council, was designed to highlight the new route of National Cycle Route 51 along the Busway and Route 11 along the Lodes Way to Wicken, and takes in all the major towns in the southern half of the county. Sadly, the Busway is still not ready, so it has to be shown as ‘future route’ even though it really will open soon.

It is part of a series of maps including updates to the Route 11 corridor from Cambridge to Saffron Walden due out soon and a sixth, completely revamped, edition of the Cambridge Cycle map. The new map is the second from the County to be produced using OpenStreetMap data (the first was Wisbech), so quite a few of you have contributed to it – thank you!