The Tins – the path between Brookfields at the end of Mill Road and Cherry Hinton – is closed between the bridge at Brookfields and the Holiday Inn for the next 11 weeks while the improved cycleway is constructed.

This will be a combination of segregated and entirely separate cycleway between Brookfields and the railway bridge and a new 3 m-wide bridge over the stream. Unfortunately the railway bridge itself can’t be changed, but we’re expecting this to be a huge improvement overall. Cycle Cambridge expects that if housing development is proposed for the Cherry Hinton end they would then also be able to improve the section into the village but for now, it is just the section west of the railway.

That’s the official name for the guided bus route from Huntington to Trumpington (or thereabouts) which, according to Cambridgeshire County Council, will ‘provide people with a reliable, fast and frequent bus service for getting to work and leisure activities in and around Cambridge and along the A14 corridor’. The Busway route and many more details are on the County’s website at www.cambridgeshire.gov.uk/transport/thebusway/.

Alongside The Busway is a new path for walkers, cyclists and horse-riders enabling them to access the Cambridgeshire countryside and commute to and from work. The northern section of this is already well used by cyclists.

We think this new cycle/pedestrian route needs its own name – it’s not The Busway as that’s for guided buses. Suggestions please!

From Harston to Trumpington

By the time this issue gets to you, work will have begun to improve the current cycle link from Harston to Trumpington and further on to the the rail station, via the The Busway. Seven hundred metres of it will be widened, while the stretch near the M11 will gain a new cycle path using the existing bridge so that in future cyclists do not have to tackle the main M11/A10 interchange. It is due to take 10 weeks to complete.

Cycle parking along The Busway

New covered and well-lit bicycle storage is being installed at most of the stops along The Busway track. According to the County Council website there will be spaces for 290 bicycles in total, at St Ives Park & Ride, Swavesey, Longstanton Park & Ride, Oakington, Histon and Orchard Park West. 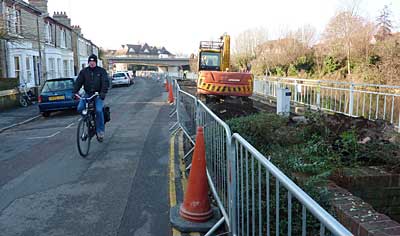 Construction is well underway at the town end of Riverside and under Elizabeth Way bridge to build a wide promenade alongside and to stop cars travelling between Abbey Road and Riverside. By making that no longer a through route for cars, the blind corner at the bottom of Abbey Road will be much improved for cyclists (who will still be able to go round the corner as well as use an improved route onto Midsummer Common).

It was thought that if this is a success the idea of a promenade might be extended further along Riverside, but now no one has any money any more, who knows whether that will ever happen.