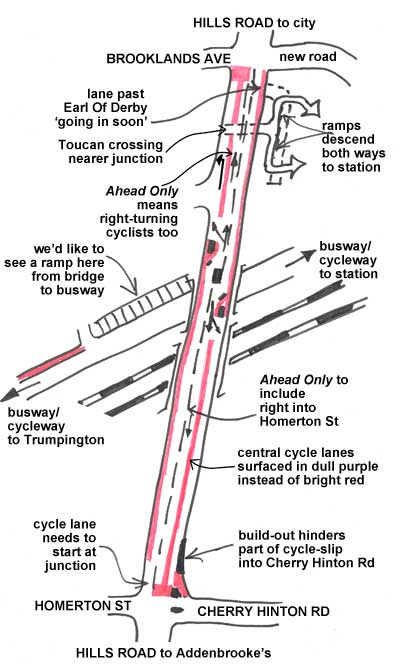 Work is continuing on Hills Road bridge and the junctions at its ends. As described in Newsletters 86, 87 and 89, this will provide a new access road into the station opposite Brooklands Avenue and remodelling of traffic lanes over the bridge to make more room for cyclists and to provide a clear layout for left-turning traffic crossing the path of cyclists going straight on. The basic layout is similar to the successful arrangement for traffic turning left to cross the path of cyclists going straight on at the junction of Trumpington Road (outbound) with Brooklands Avenue (see illustration in Newsletter 87).

Roadworks will continue into the New Year but the lanes over the bridge should be largely complete by Christmas. The Guided Busway and cycleway under the bridge are already nearly finished. The County Council expects the contractor to complete the whole southern Guided Busway by mid-January and other contractors to work on completing the tarmac surfacing of the maintenance track/cycleway alongside soon after.

While the new Hills Road bridge scheme is a very positive development, not all aspects are quite as proposed. In some cases improvements have been made, in others not. The County Council Officers concerned still will not provide a phase in the signals for cycle movements from the new road from the station into Brooklands Avenue. The cycle lanes over the bridge are not nearly as bright red and prominent as they should be.

We recently met Council Officers to discuss these and some lesser problems in detail.

Cyclists will be banned from crossing from the new road directly into Brooklands Avenue. We fear that some cyclists will make this manoeuvre anyway, putting themselves at serious risk.

The whole scheme should see major improvements for cyclists and pedestrians, large numbers of whom travel through the area each day. A recent County Council count shows 5,377 cyclists and 4,420 pedestrians using the bridge between 7am and 7pm on a weekday. Injury casualties have been relatively high. According to the County Council’s Safety Audit dated 18 March this year, there were 34 reported cases of minor injuries and four cases of serious injuries suffered on the bridge and at the junctions at each end between January 2004 and June 2009. Of these 38 cases, 27 involved cyclists – a higher proportion than elsewhere.

New street lights are still to be installed. A so-far missing length of outbound cycle lane will soon be installed outside the Earl of Derby pub. We were becoming concerned that it was not yet there. The hazardous pinchpoint at this location should then disappear.

Officers also agreed to see whether the inbound cycle lane on the Homerton Street side of the bridge can start immediately after the junction. Currently it starts maybe 15 m further on.

The colour of the cycle lanes on the bridge is wrong. At the earlier consultations we were assured that the lanes would be bright red.

Getting onto the Busway

We would also like to see a long, gently-sloping pedestrian/cycle ramp down from the Trumpington side of the bridge onto the maintenance track of the Guided Busway. Looking over the parapet of the bridge, it is now clear that a ramp might be possible wholly on Busway land. This would provide better access from, for example, Hills Road Sixth Form College both to the station and towards Trumpington and also from the busway towards the city centre. An additional or alternative pedestrian/cyclist route to the Busway could be constructed via the Unex (City House) entrance on the bridge if Unex would allow pedestrians and cyclists through their land as part of the current negotiations over planning permission for a new building.

If the problems we have outlined can be resolved, we believe that fundamentally the scheme is a good one.