So, Cycling England has been scrapped. Its status as a quango meant that it was always going to be on shaky ground, even though it employs merely four people, has no office, and a tiny budget.

Better news is that, partly thanks to our open letter campaign at www.SaveCyclingEngland.org, Bikeability has been saved. Some £10m has been reserved to ensure that the hugely successful UK-wide child cycle training scheme continues. It would have been tragic to see this scrapped. What is not known yet, however, is how it will be managed. We don’t yet know if it will be managed centrally by civil servants (which historically has led to less than satisfactory cycle training schemes) or whether the Department for Transport would consider bids from national cycling organisations to run it.

The government announced in September a new Sustainable Transport Fund, with a £560m budget attached to it. What remains to be seen is what kind of schemes it will fund and whether cycling will get enough of a look-in. Just as important is how any cycling schemes will be judged in terms of quality. One of the benefits of Cycling England has been to provide consistent advice to local authorities about the standards of design that are required for all their schemes, thus avoiding the usual mass of blue-sign-on-a-pavement schemes that sadly remain a common feature of cycling ‘facilities’ around the UK.

We have invited Phillip Darnton, who continues to head Cycling England in its last few months, to speak to a monthly meeting soon. Members are strongly encouraged to come to that meeting when it has been finalised. He spoke frankly at the Edinburgh conference (see page 4) about the future for cycling promotion in the UK, so should be well worth coming to hear. 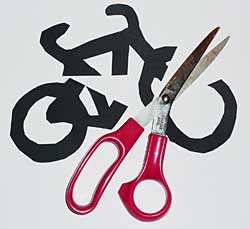 Back on local soil, the Cycling England-funded Cycling Demonstration Project for Cambridge, known as Cycle Cambridge, is in the middle of its third and final year, with many schemes coming to fruition.

Those members who attended our AGM in November (see next article ) were treated to a whistle-stop tour of the massive number of schemes which Mike Davies and other officers at the County Council have worked on. From tackling long-running sores like the Gilbert Road scheme and Hills Road Bridge, to new links between the villages, together with smaller initiatives like new cycle parking and promotional work, Cambridge has seen a lot more activity in recent years.

There is of course much more that could be done, though the national funding situation will mean that the next few years will see concentration on smaller schemes, such as allowing contraflow cycling in one-way streets, cycle parking and other niggle-fixing. Nonetheless, these are changes which many cyclists will appreciate as they are problems which affect very many daily journeys. Please do report your priorities for new cycle parking and removal of obstructions at cyclingsorted.org.

We have written letters to both the County Council and the City Council regarding the need to retain cycling funding and staff following any cutbacks the Councils may be making. Without cycling officers we would see little in the way of new schemes. We would also see inappropriate developments being let through the planning system – one key role played by cycling officers is to provide internal scrutiny of the cycle-friendliness of development proposals.