The Campaign regularly arranges study tours to look at various aspects of cycling in other places. Previous tours have visited Groningen, York, Århus, Münster and Assen. This year we went somewhere closer to hand, that we have also visited before: The Other Place, also known as Oxford.

The visit took place on the weekend of 14-15 August, with five of our members (who all happen to be Committee members) being hosted by Cyclox, our Oxford counterpart. We met up at Oxford’s Gloucester Green Bus Station on Friday evening and went out to get something to eat with our hosts and discussed plans for the following day before going off to our accommodation with Cyclox members. 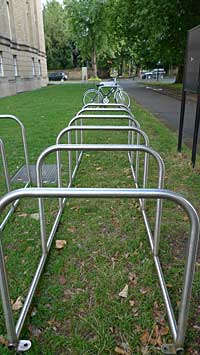 Much of Saturday was spent cycling around the city looking at what our hosts had dubbed ‘The Good, The OK and The Ugly’ – the cycling facilities. The tour was split into three parts, each including some facilities which fell in to each category. The first leg ended at Keble College where we met a cycling officer from Oxfordshire County Council, who talked us through a recent survey of cyclists they had done. The second leg took us to a pub in Old Marston, where we had lunch; and the third leg, which took up most of the afternoon, covered a very large area and a wide range of facilities. We ended up back at Keble College for a discussion of our impressions of cycling in Oxford and how we felt it compared to Cambridge. We then spent a very pleasant evening having dinner at a ‘secret location’ in the north of the city – which turned out to be the home of one of the Cyclox members. On Sunday, some of us went on a ride out into the countryside while others preferred to explore the city further before getting the afternoon bus back to Cambridge.

The trip was very interesting and informative, thanks to the efforts of our hosts, and we hope to arrange a reciprocal visit in the future. We plan to produce a more detailed report comparing here and there and considering whether there are things we can learn from Oxford in the next issue of the Newsletter.