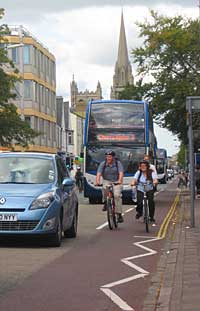 There is a lovely smooth, slightly red, new surface on the southbound stretch of Hills Road between the City Centre and Station Road. I regularly cycle the section from the Catholic Church to Station Road at peak hours, and I must admit to having been horrified initially when an Advisory Cycle Lane was painted on the new surface rather than the Mandatory Cycle Lane that had been there before. I gather however, that the Traffic Regulation Order for the original lane is still active, so it can be reinstated if necessary.

Having used the road for four days since then, including now all the schools are back, I’m prepared to give it a longer try. It is definitely wider than the old lane which should mean there is more of a chance of getting past very slow cyclists, and the totally stationary traffic is further away from you as you whizz past. The lane now starts the moment you get onto the stretch I use, at the junction with Gonville Place, which is a real advantage as often drivers wanting to take the first left turn would completely block my path. They seem to be obeying the road markings and no longer pulling over to the left very early and then grinding to a halt, queueing and blocking my route so I had to sit and queue too. The old cycle lane used to start after Harvey Road. As long as drivers don’t invade the lane in order to queue or dangerously cut in, the wider width should be an improvement.

However, what still needs to be done is to put back the yellow marks (denoting a loading restriction) clearly painted on the pavement, so that Local Authority Parking Enforcement officers can actually enforce the loading ban at peak times. Were they able to do that, they’d have rich pickings and it would be worth their while to visit the area at least once a week. It would also be an improvement if the loading ban stretched the entire length. Quite why a Richmond’s coach is allowed to block what is now an Advisory Cycle Lane opposite the Catholic church for a full five minutes around 8.30 am every morning is beyond me. The road is very narrow with a central island, and the coach wide enough to make it impossible for cyclists to do otherwise than join the queue of stationary traffic. This, combined with the frequent illegally-loading lorries and taxi drivers getting snacks, is really what makes this stretch of road sometimes slow and dangerous to cycle along.

Earlier this year officers from the city council proposed that Fisher Square should have some cycle parking reinstalled. As anyone who uses the Grand Arcade cycle park will tell you, this gets full far more often than when it first opened so any extra parking would be welcomed.

So we were very disappointed to see that the Officer report to the West / Central Area Committee late last month was recommending that cycle parking not be approved in this area due to ‘lack of available space’ and that anti-cycle notices should be attached to railings and cycles removed.

The history of this site is that Fisher Square used to have a large amount of cycle parking, which was effectively ‘stolen’ from the area as a result of the developments nearby. This was done on the basis that the Grand Arcade cycle park would take up the existing parking need, despite it actually being intended to deal with the additional demand generated by the new shopping mall. The cycle park closes at 11 pm which is pretty inconvenient for anyone wanting to go to a concert at the Corn Exchange or see a play at the Arts Theatre.

The fact that officers were suggesting that signs be put up to discourage parking and that bikes would be removed shows that there is clearly a demand for cycle parking there. On the whole, bikes don’t cause a problem though obviously there is a need to make sure bikes don’t block the wheelchair ramp. People would use cycle racks if they were provided, and discourage them from putting their bikes where they might block access and cause resentment.

These comments were sent to the West/ Central Area Committee meeting on behalf of the cycle parking subgroup and the councillors decided to defer the decision and consider whether in fact racks could be installed.