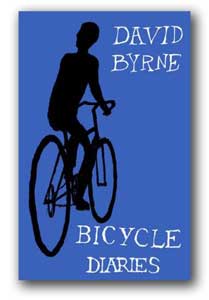 Those of us who were at the Campaign’s August meeting were treated to a few quotations from this book, and I’m glad to say that I have now got around to reading my copy. You might not expect the leader of the most prestigious art-rock band (Talking Heads, of course) to know much about urban planning and sustainable societies, but you’d be wrong. He’s been riding bikes in New York City since the early 1980s, and discovered folders in the late 1980s – he was soon taking one on tour with him, and continues to do so as he travels the world (though now he’s more involved with contemporary art than with music).

However, this isn’t really a book about cycling, but more about social insights largely obtained while cycling through cities worldwide – although he rides the train through Baltimore, where he grew up, and rents a Land Cruiser in the centre of Australia. It’s what he calls ‘a “Fantastic Voyage” through the collective brain’ – a fairly random set of insights into different cultures and the way we live today across the world.

There’s a chapter on London, where he uses his bike a lot, but doesn’t have anything much to say about cycling as such. Finally, at page 243, the chapter on Byrne’s hometown of New York is mainly to do with the boom in cycling there, which he ascribes largely to young creative types increasingly living in Brooklyn and cycling to Manhattan, with numbers on the bridges rising three- or four-fold in 2008 alone! In addition to the usual white-painted-line cycle lanes, there are also now appearing new cycle lanes separated from the traffic by barriers or parked cars, which make cycling feel far safer. Byrne gives a nice tip of the hat here to the Warrington Cycle Campaign’s Facility of the Month, by the way.

There is a short appendix on choosing bikes and helmets, and Byrne’s sketches for quirky bike racks tailored to specific New York City locations (such as a dollar sign on Wall Street) – but overall, readable and interesting as it is, as I said above, this is not a book about cycling.