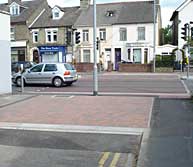 At long last, one of the worst crossings in Cambridge for cyclists has been upgraded with a brilliant, best-practice new crossing. The crossing is now an accessible, and barrier-free, single-stage crossing which makes the route from Petersfield to Riverside much easier and safer. If there is one problem, it is the gully which creates a slight bump, but the whole crossing is now far better than before. We’d like to congratulate the signals team at the County Council who consulted with us in advance and took into account many of our comments.

Despite the dry weather, vegetation on road verges has not stopped growing and we have had complaints about the reduction in width this causes. For example, the part of the Jubilee Cycle Path which runs into the end of Tiptree Close (off Fison Road) is so overgrown that nettles from both sides are almost meeting in the middle. The stretch from Ditton Lane to the junction with the Fen Ditton path near Howard Road is also pretty bad in places – about half the usable width has been lost, and one of our members reported some difficulty passing a mobility scooter coming from the opposite direction.

There are similar problems on the Shelford-Addenbrookes path where the field margins have been planted with wild flowers. These make the route very attractive and provide a habitat for bees and other fauna. Enough needs to be cut to prevent vegetation blowing or falling into the path of cyclists: one metre from the path edge should be sufficient. The ideal might be to cut the verge at an angle so that the cut is very short next to the path and gets progressively taller, for about a metre, depending on the cutting head.

The Cambridge News reports that work is beginning on a new road connecting Cambridge’s railway station to Hills Road. This is part of the Cambridge Gateway, linking the junction of Hills Road and Brooklands Avenue to the station area. It will allow buses to enter and leave the station area without having to use the congested junction at Hills Road and Station Road, as well as providing a new access point for pedestrians and cyclists. Work has also begun on cycle-friendly improvements to Hills Road bridge.

The Advisory Cycle Lane on Trumpington High Street between Shelford Road and Maris Lane has been accidentally removed. It was not repainted properly when the road markings were redone in June. The Campaign will follow this up.

Seven schemes are moving towards completion and the following is a summary of progress so far. The funding for all these has come from Cycling England (which is facing an uncertain future given the economic situation).

This seeks to improve the shared-use path from Cottenham to Histon. Negotiations are continuing with landowners to purchase the land needed to widen this path but the Council can buy it using a compulsory purchase order if these talks are not successful.

From Histon to the A14 roundabout a combination of off-road shared-use and on-road cycle facilities will be built with a single-stage crossing on the Histon side.

There have been problems with this scheme as the landowner is being tardy in signing the land deal required to create the 3-metre-wide shared-use path to the Plant Breeding Institute. If the deal is not signed in good time, the funding will have to go on improving another cycleway.

By the time this newsletter goes to press, the 2.5-metre-wide shared-use path should be open.

Work to link these two villages has reached the halfway point and the next phase from the A14 to Fen Ditton is due to start soon. The Council expects this to become a busy route, not just for commuters but for school pupils too.

A shared-use path is proposed to link these two villages and provide access to the Park & Ride site. Talks are taking place between Parish councils and local members who have concerns about this scheme. A Section 106 agreement requires that a path is built to Mere Way from the the site of the old poultry farm. 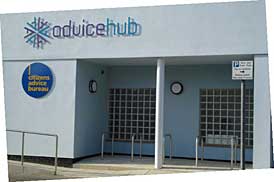 This scheme is designed to provide a signed cycle route of 2.5 metres width using the footpath and existing bridge across the A11. Hopefully work can begin in the autumn once all the land deals have been completed.

Removal of the scaffolding and hoardings around the new Citizens’ Advice Bureau reveal five new Sheffield stands, under cover near the entrance. 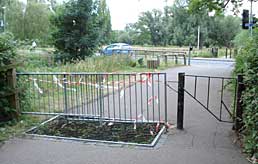 It appears that the cattle grid at the entrance to Coe Fen from Fen Causeway, heading towards the City Centre (above), is failing to keep the cattle in, perhaps because there’s a gap to one side of it. So it has been blocked off and everyone, including cyclists and people with buggies or in wheelchairs, has to go through the gate.