Our April monthly meeting was replaced with a Question Time -style election debate, on the day the general election was called. It’s a good thing we got in early, as the candidates went on to do an exhausting 35 hustings!

Daniel Zeichner for Labour, Tony Juniper for the Green Party, Julian Huppert for the Liberal Democrats and Nick Hillman for the Conservatives all spoke (left to right in photo, with David Earl chairing in the middle), providing food for thought for a very full room of members. After the candidates had introduced themselves and given a summary of their views on cycling, an hour of questions from members followed. A whole range of issues was covered, from 20 mph zones, to policing issues, bus/cycle conflict and much more.

We’d like to thank all the candidates for their time.

Interestingly, almost the only thing that didn’t get covered much was the helmet issue! This is one area where Cambridge’s outgoing MP, David Howarth, helped us out during the Highway Code debate a few years ago. This is a good time to thank David Howarth for his work on behalf of cyclists. As you will know, Julian Huppert was elected as Cambridge’s new MP. Julian, a long-standing member of the Campaign, was the Chair of the Transport Area Joint Committee, and will be known to many cycle campaigners in Cambridge.

Once again, we ran our survey of all the election candidates. We asked a series of questions – half local, and half city-wide, to candidates in all 14 City Council wards and three of the South Cambridgeshire District Council wards near Cambridge. Of the 87 candidates, some 40 responded, almost half. We’d like to thank all who responded for their time.

Questions, as usual, were put forward by members of Campaign. There were three main city-wide issues which all candidates were asked this time – whether they:

There were many positive responses on these issues, and these are things which the Campaign needs to work with Councillors to achieve in the coming months and years ahead. 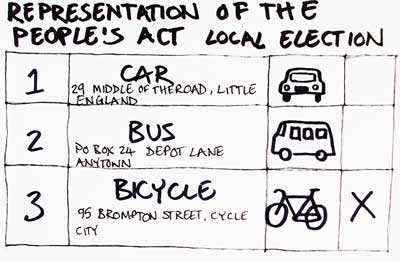 Ward-specific issues about which we asked candidates included the question of lifting the part-time cycling ban in Fitzroy/Burleigh Streets (on which there was some support), removing the obstructive parking on East Road (which several candidates thought was worthy of consideration), support for the Chisholm Trail (our headline proposal for a cycleway alongside the railway, linking the Science Park to Addenbrooke’s), the Gilbert Road cycle lane issue, and more.

You can read their responses at www.camcycle.org.uk/elections (or members can contact us for a printed copy of the response from any ward(s)).