We have previously drawn attention to a troublesome and unnecessary partial blockage of the shared-use pavement along Cherry Hinton Road close to the Cowper Road side road (see Newsletter 86). What happened was that the pedestrian crossing on Cherry Hinton Road was refurbished last year and two control boxes for the crossing, one large and one small, were installed by the County Council in positions where they obstruct the shared-use pavement. To make matters worse, the obstruction is precisely at the point where people, often elderly, are waiting for the traffic lights to change so that they can use the pedestrian crossing. Pedestrian-cyclist conflict has been created by bad design.

Local councillors have been helpful in taking the matter up on our behalf and Councillor Tariq Sadiq has now told us that the owner of the forecourt of Boots Pharmacy has agreed to allow the control boxes to be moved to the forecourt where they will cause no obstruction. We await news as to whether Boots will also agree.

There is another troublesome obstruction of this same shared-use pavement close to the roundabout where Cherry Hinton Road joins Perne Road. Vehicles regularly park on the pavement here. Elsewhere on this shared-use pavement action is taken against pavement parking but not here. The reason seems to be that there are no double yellow lines on Cherry Hinton Road at this point, making enforcement action more difficult. Pavements shared by pedestrians and cyclists are problematical anyway and obstructing them with parked cars greatly increases the difficulties for both pedestrians and cyclists.

Roadworks for the new Cambridge Gateway road into the station, a new layout for the Brooklands Avenue junction, and cycle lanes over Hills Road bridge are due to start shortly. It is expected that the bridge will be reduced to a single narrow lane during the school holidays to enable the changes over the bridge.

Work should be complete by the end of September. The complex work on the bridge is taking out the central reservation.

We described the scheme in Newsletters 86, 87 and 89, but just to recap briefly: on both sides of the bridge there will be cycle lanes (wider than we are used to – 2.1 m) up the bridge. At the top, if you are going straight on, you will move into the middle at an island and then join a 2.1 m cycle lane between the left-turn and straight-on traffic lanes. Motor traffic has to cross your lane just after the summit. Cyclists turning left will just use the left-turn lane. There are advanced stop lines at the junction at each end of the bridge replacing the separate phase of the traffic signals for cycles.

At the Cherry Hinton Road end, you can still bypass the lights if you are turning left. On the Brooklands Avenue side, there is a toucan crossing half way down the bridge giving access to and from additional access to the station and the busway cycle path to Trumpington.

In spite of the frequency and visibility of the offence, a Freedom of Information request has revealed that only five motorists were fined (£30 each) in Cambridge between 1 January and 31 March 2010 for obstructing cycle lanes. Four of these offences were in Regent Street and one in Emmanuel Street.

Double yellow lines have been installed in Coleridge Road at the former school site, removing the obstacle for cyclists of parked cars and traffic queuing. 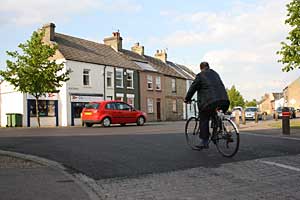 Let there be light

Solar studs (like the ones on the path south of Addenbrookes) are currently being installed on the dark section of Newmarket Road between the Park & Ride site and the Quy tunnel under the A14.

At least some of the damage wrought by last winter’s harsh weather is being put right more comprehensively now than just by poor-quality hole-filling. Chesterton High Street (see picture) and parts of Mill Road have been completely resurfaced and large patches of road near Cherry Hinton Church which had very large and deep potholes have been cut out and re-laid.