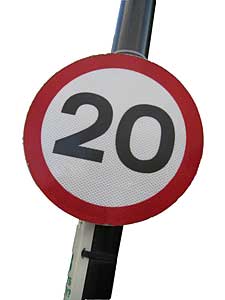 Portsmouth is now famous among all interested in UK transport planning for its pioneering and successful introduction of a general urban speed limit of 20 mph in March 2008. A series of speakers at the CTC/CycleNation conference held in Portsmouth on 17th April this year reviewed progress so far.

The Portsmouth scheme applies the 20 mph limit to most of the city – a total of some 1,200 streets – but not to major roads which are part of through routes. These major roads retain their previous 30 mph limit. The 20 mph roads are not traffic-calmed by speed humps, cushions or raised tables or by landscaped speed reduction measures. All that has been done is to put up 20 mph signs. The effect has been striking. Where mean speeds were previously above 24 mph, an average reduction of 7 mph has been achieved. On the many streets where mean speeds were previously below 24 mph, obviously very much smaller reductions have been achieved.

Where mean speeds were previously above 24 mph, an average reduction of 7 mph has been achieved

All reductions, even very small reductions, in mean speed are worthwhile. Small increases in speed cause large increases in the frequency and severity of injuries caused to pedestrians and cyclists hit by motor vehicles. Someone hit at 30 mph is about ten times more likely to be killed than someone hit at 20 mph and even very much smaller speed reductions markedly diminish the risk of injury and death. In Portsmouth, casualty figures since the introduction of the 20 mph scheme point to injury reductions, especially for children and the elderly, but it is still too early for statistically significant figures.

We were told that before the introduction of the 20 mph scheme in Portsmouth much preparatory work was done. The police were initially doubtful but were gradually won over by extensive consultation and discussion. Neighbourhood forums, residents’ associations and other community groups were actively recruited. The scheme is popular and those opposed are now a small minority. Council officers told us that their aim is to make speeding in residential areas as unacceptable as drink driving. Disappointingly there is no evidence yet of modal shift, i.e. of reduction in car use or increase in walking and cycling.

The scheme is popular and those opposed are now a small minority. Council officers told us that their aim is to make speeding in residential areas as unacceptable as drink driving

The Department for Transport has recently issued draft guidance to local authorities supporting the introduction of 20 mph limits. The aim is to encourage 20 mph limits in residential areas and other urban streets which are heavily used by pedestrians and cyclists.

Cambridge has, of course, exceptionally high figures for both pedestrian and cyclist movements and is a strikingly suitable candidate for a large-scale 20 mph scheme. So far moves towards 20 mph in more areas outside the historic city centre have been tentative. Just designating lengths of road close to schools, playgrounds etc. as subject to 20 mph limits is not the answer. The challenge will be to apply the DfT guidance, when it becomes fully approved and when the police support it, to very wide areas of Cambridge, ideally the whole city with the possible exception, as in Portsmouth, of major through roads. In Cambridge, with its culture of walking and cycling, the likelihood of modal shift away from car usage towards more walking and cycling for short journeys seems to me to be greater than in Portsmouth.