Cycle Cambridge is endeavouring to provide better routes between villages on the edge of Cambridge. As reported in Newsletter 88, consultation on these has taken place. Here we provide an update on progress, or lack of it. 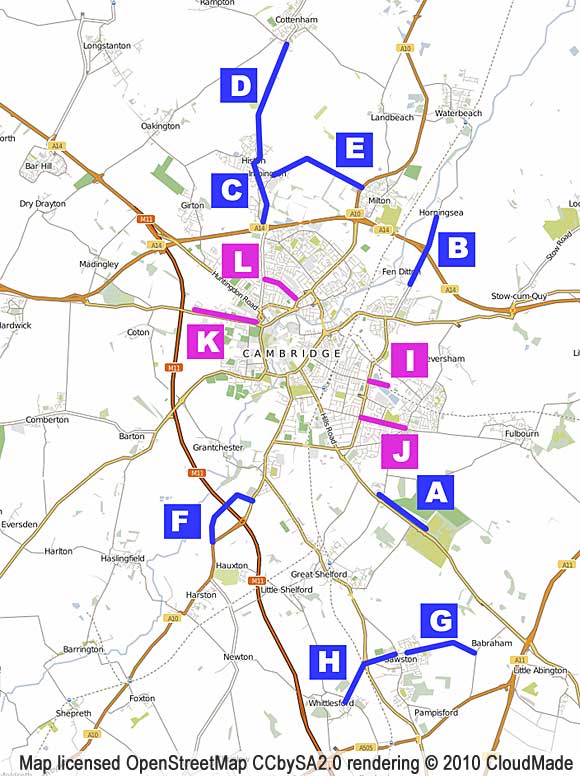 Issues relating to land ownership are delaying a number of schemes, but starts have been made or are due to be made shortly on some routes.

Babraham Road Park & Ride to Wandlebury [A]. Although not a commuter route and not as wide as we would have wished, a start has now been made on this section of cycleway on the north side of the busy A1307. It has been frustrating that these green spaces were so inaccessible except by car. Hopefully, many city residents will soon be able to cycle with children to these areas in comparative safety.

Fen Ditton to Horningsea [B]. Work has started on this route comprising shared-use cycleways crossing the road more than once.

Histon and Impington [C]. Some work due to start shortly on the main road through the villages, including reductions in speed limits.

For others, problems continue:

Histon to Cottenham [D] still has issues over land acquisition for this wide off-road cycleway, and no start date is in prospect.

Milton to Impington [E] is complicated by planning issues and hence has no timescale.

Harston to Trumpington [F]: this will bypass the A10/M11 junction using the next motorway bridge to the north and then integrating with the Trumpington Meadows housing development. This is the one I find extremely frustrating, as the only work required is a few hundred metres across a green field. I can see no reason why the developer could not have agreed to this section well in advance of any full planning permission or section 106 agreement (where developers pay for infrastructure). A committee member walked this section with a land agent about two years ago; If it had been built then it would have given a good route for cyclists avoiding all the horrible road works around the M11 and Addenbrookes Access Road junction on Hauxton Road. It seems that the developers can’t see a good bit of PR, even when cheap and put right under their noses.

Sawston to Babraham [G]: again issues over land acquisition are delaying this off-road cycleway, and a section on to Abington seems likely to be just a ‘permissive’ route with little or no physical changes.

Two other schemes, funded as part of the ‘Links to Schools’ project, should also start soon. One is Bottisham to Lode [not shown], and the other is Whittlesford to Sawston [H]. This second was proposed as a Sustrans route some years ago, but Environment Agency rules regarding upgrading a couple of footbridges stalled the scheme. I gather some rules have been relaxed, so the route from Whittlesford to Sawston Village College via the ‘Spicers’ crossing (a foot bridge over the river and level crossing at the entrance to the paper works west of Sawston) is now considered viable.

Progress on Cambridge city schemes has been mentioned in more recent newsletters: The Tins [I] requires land to improve the off-road path; Cherry Hinton Road [J] and Madingley Road [K] with 1.5 m wide lanes one way and off-road provision the other, being developed; and Gilbert Road [L], cycle lanes in doubt.