This article was published in 1996, in Newsletter 9.

The first day started by concentrating on the bicycle itself. Ken talked about choosing a bike, making it safe and comfortable to ride, and keeping it that way, and then he and Mark Irving of the Campaign checked people’s bikes for practical examples.

After lunch we looked at basic riding skills and habits. After a look at Ken’s video (co-starring Tony Robinson). we went outside for a slow bike race (from which I was disqualified at the outset for putting my foot down) and then an interesting exercise in getting lost on the Addenbrooke’s site.

The second day began by dealing with sharing the road with motor traffic and other users, and went on to cover some more difficult manoeuvres.

The course was well attended by work-place cycling co-ordinators, our cycling promoter Anne Taylor, and John Richards and Andy Walford from the County Council, as well as members of the Campaign and the general public, so we had some interesting discussion to complement the practical instruction. Everyone who completed the course successfully got a Safer Cyclist Certificate from the Campaign.

Thanks to everyone who helped to organise the event. We hope the experience will now allow us to develop training with local trainers, and provide a better format for the training in the future. It is also possible that the County Council may be amenable to running it themselves, especially knowing that York’s one-to-one scheme is more-or-less self-financing. 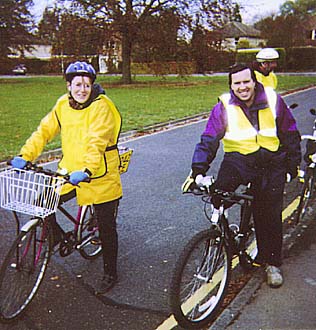 York cycle trainer Ken Spence, about to set off on a training ride with Campaign member Sarah Irish.