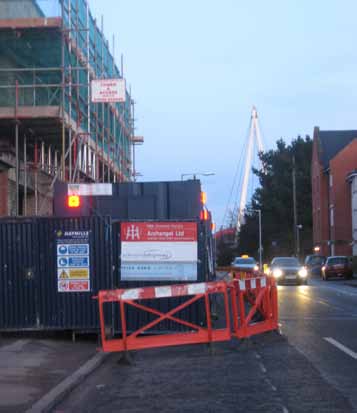 Following email correspondence with Haymills, the contractors working on the building next to the Youth Hostel in Devonshire Road, red warning lights have appeared on the hoardings. It seems surprising that responsible contractors should think that they could put up hoardings and barriers, which block almost half the carriageway, without any warning lights. The photo in the last Newsletter showed the problem; this one shows the response
to the emails.

Cambridge carriageways, as elsewhere in the country, have succumbed over the last few months to frost-shattering, the effect of water seeping into cracks, whether in a road surface, rocks or bricks, and then freezing, expanding and breaking up the surface. A natural process, one that creates gravel, sand and soil from rock, but highly undesirable on roads. The broken-up surface is then damaged further by vehicles throwing out bits of tarmac and gravel resulting in large hazardous holes. These are in the process of being repaired but for the moment present real hazards to cyclists. Please take care!

An accident involving a cyclist recently has highlighted the hazards presented at the complex junction at Lensfield Road, Trumpington Street, Trumpington Road and Fen Causeway. At present there are two mini roundabouts – would traffic lights help or are there better more cycle-friendly solutions? As one of our members said on the email list, ‘a road layout that is so dreadful it scares off many users is as unfit for purpose as one which regards collisions as acceptable’.

The diagonal paths across Parker’s Piece are important routes for cyclists and the Campaign is well aware of the potential for disruption, especially on the north-south path from the junction at Clarendon St, Parker St and Parkside towards the Catholic Church. Early this year the exit onto Gonville Place was narrowed, when the bollards were replaced by a gate. What made this worse was that when the gate was first installed it was invisible at night, as
it was painted black though, following comments from Campaign members, reflective strips have been added, which mean that it shows up well in bright lights (or the flash from a camera).

We understand that the bollards were no longer strong enough to keep vehicles off Parker’s Piece and that a gate was chosen as it is easier to open when access is required by emergency vehicles. However, the effect is to reduce the width of the entry/exit from Parker’s Piece substantially, resulting in congestion and conflict between cyclists and pedestrians at busy times. The Campaign is
in contact with officials at the City Council to try to improve the situation and to forestall gates being installed elsewhere where they may block cycle routes.