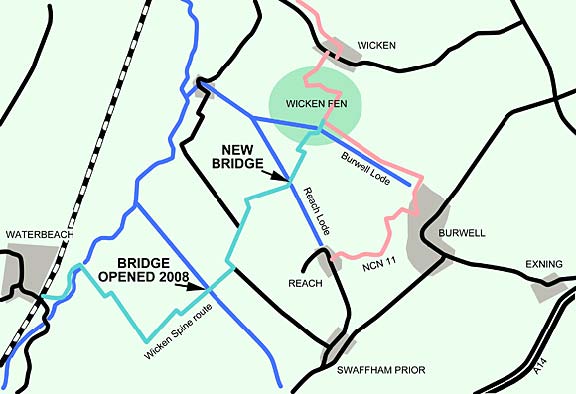 Construction has begun on a new crossing over Reach Lode, a missing link in the route being developed by the National Trust between Wicken Fen, Anglesey Abbey and Bottisham, with funding from Sustrans, Natural England and the government’s Department for Communities and Local Government.

The contract for the design and construction of the bridge has been awarded to BAM Nuttall, known for their work on the guided busway. The bridge will have gently sloping ramps to blend into the fen landscape and provide easy access for walkers, cyclists and horse-riders; two wildlife ponds will be created after the excavation of clay to build these ramps.

The bridge is a key part of the 14.5 km [nine miles] route at the heart of the Wicken Fen Vision, the project to create a 53 km2 (‘landscape-scale’) nature reserve and a green lung for Cambridgeshire and the East of England region. This route is to be called the ‘Lodes Way’, after the historic waterways it crosses. It should be completed within three years when another bridge is built over Burwell Lode, completing National Cycle Network route 11 between Cambridge and Ely and linking to Route 51 to Newmarket. It will also provide links to local villages such as Upware, Wicken, Burwell, the Swaffhams, Lode, Quy and Bottisham, and will be open to walkers, cyclists and horse-riders.