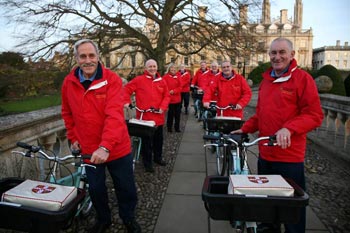 On a visit in November 2009 to commemorate Cambridge University’s 800th anniversary, HM the Queen sealed the final archive box of a set of eight, each containing a hundred ‘Letters to the Future’ written by University staff, students, alumni, members of local community groups and representatives of over 80 higher education groups around the world. The boxes were then taken by the university’s cycle messengers to the University Library, where they will be stored until the University’s 900th anniversary in 2109, when they will be re-opened.