At long last, the new entrances to the contraflows at Mackenzie Road (right)and Kingston Street (far right) have been installed, and they are certainly an improvement. These contraflows were created after a campaign which involved fending off opposition from some local Labour Party councillors. 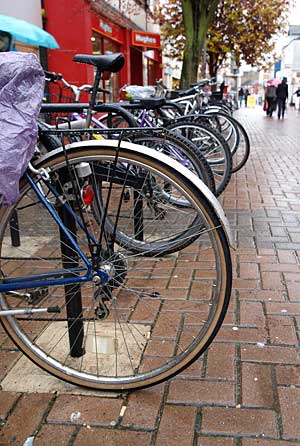 Some excellent new secure cycle parking in various spots around the Grafton Centre (including a much-needed set using space outside the Co-op Bank) has been installed, much of it in very useful locations. We think this may be due to the opening of the new Primark store.

We have reports that this is now being used to capacity and is often full. Suggestions as to how to make more space for cycle parking, either here or elsewhere, welcome.

A novel form of cycle parking, these are being installed as part of the Cycle Cambridge demo town as a laudable attempt to try some new and different things. They provide some security for cycle parking where there would not otherwise be room to install racks. We understand that they are quick to install and can be removed if necessary and reused elsewhere. But they are not a substitute for properly installed cycle parking where there is space for this and should not be sited where they might result in obstructions for pedestrians.

Have you used them? What do you think of them?

The cycle lanes along Cherry Hinton High Street have been repainted. Generally renewing the surface and line markings on existing cycle routes is good. But these cycle lanes are very poor quality: very narrow lanes that are systematically encroached upon by motor vehicles, with awful ‘bypass’ lanes that are in fact tight chicanes with a ‘lip’ on the entry that can catch your wheel and dump you into the road. The worst stretch is the section in front of the shops that has just been re-painted. Less than 1 m wide, the lane is tight against the car parking bays (no door clearance). This is exactly where you should NOT ride. Was it really worth repainting them? Painting the lane bright red will only encourage them to believe that we should stay in that narrow, dangerous lane. Perhaps before any infrastructure is ‘renewed’ it should reviewed against current guidelines / good practice. Infrastructure that does not make the grade needs to be brought up to standard, not just repainted.

Many of the roads leading down from Newmarket Road to Riverside have been resurfaced. As many were in a poor state the resurfacing is an improvement but unfortunately Riverside, which was in a much worse state, has not (yet) been resurfaced. We have also had comments on the lack of road markings at the junctions of these streets with Riverside. Given that Riverside is heavily used by cyclists, especially since the opening of the new cycle/pedestrian bridge to Chesterton, we hope it will be resurfaced soon.