My lovely old Raleigh finally packed up a while ago with a broken bottom bracket. I’ve been very fond of old bikes for ages now but on further investigation found that replacing this key part would be more trouble than it was worth, sadly. So I had to get a newer bike and one that required less ongoing maintenance. The time between deciding this and actually taking charge of the latest one was quite long but, and here I’ll go off-topic, may I plug walking which I did a lot of during this time? It’s surprising how much it’s possible to notice on foot. 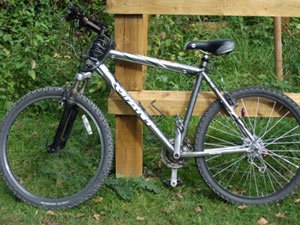 Initially, I went round just about all the bike shops I could think of trying to find The Very Thing but never quite doing so. I’d wanted to look round OWL bikes (which stands for Opportunities Without Limits) so one day I visited. Part of the attraction of buying something from this place is that they check all the bikes with the police to make sure they aren’t stolen and if they are in good condition refurbish them to BSI standard for resale. If not, the bikes are broken down and all the parts that can be reused are, and the rest recycled, so nothing gets wasted. As a social enterprise, they provide work for disadvantaged people, bikes being just one arm of the project. Second-hand bikes are also cheaper, of course.

On my first visit they were closed for the afternoon but my second was more successful. The preliminaries over (admiring a refurbished 1940s Armstrong – beautiful thing) the assistant explained that if I was happy to wait I could go to the warehouse and pick a bike out from the 200 they had ready to be ‘rebuilt’. I went off and spied a rather fine mountain bike which I sat on to check that I felt comfy on it and with it. It clearly needed work as the back wheel was flat, the brakes didn’t work and the chain needed replacing. I’d not normally go for something quite so modern but had realised that changing a wheel on these wasn’t half as tricky as I’d thought it would be. The assistant explained that there was no obligation to buy it if I felt it wasn’t right once this had been done. Because it was more complicated to repair than originally thought, it took a bit longer to fix: the back wheel needed replacing as they discovered it was broken when they took it out for a test ride. However, in early September I took charge of a splendid Giant bike in excellent condition (above). I have, of course, registered it with www.bikeregister.com which the police used to use for security marking. I’m anticipating many happy hours of cycling pleasure from it. It may not quite have the soul of an old bike (yet?) but it is fun!