The following article was posted by Debra Rolfe on the Guardian’s website [www.guardian.co.uk/environment/green-living-blog/2009/nov/02/bad-drivers] on Monday 2 November 2009 and is reproduced with her permission and that of Guardian News and Media. Debra Rolfe is the campaigns director of CTC, the UK’s national cycling organisation.

Have you witnessed or experienced a bicycle crash caused by bad driving? Report it to a new database and help cyclists take back the road.

Sorry mate, I didn’t see you in that car … the Stop SMIDSY campaign aims to report and thus reduce bad driving that hurts cyclists.

How ironic: the only time I’ve been knocked off my bike was a few weeks ago, when I was just about to launch Stop SMIDSY, a cycling campaign to combat bad driving. After I hit the ground, the first thing the driver said to me was: ‘Sorry I didn’t see you!’. 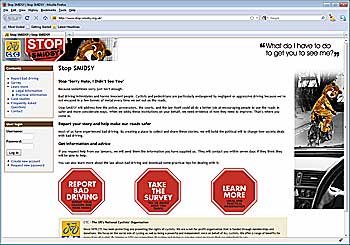 Fortunately, I suffered relatively minor injuries, and the driver paid for my bike to be repaired. But I was shaken and shocked that the driver hadn’t seen me, and seemingly hadn’t thought a cyclist would be on the road.

This incident served as a reminder of just why I am running the campaign in the first place. SMIDSY stands for ‘Sorry Mate I Didn’t See You’, a phrase most regular cyclists have heard at some point. Stop SMIDSY aims to raise awareness of bad driving and to collect evidence of it, to ensure that inattentive, arrogant or aggressive (i.e. bad) driving happens less.

Cyclists can get involved by visiting Stop-smidsy.org.uk and reporting crashes and near misses you’ve experienced or witnessed. Tell us what happened and why you think the driving was unacceptable. If applicable, you can report how the police, civil and criminal courts dealt with it, or request legal help from CTC’s accident line. In the ‘Learn more’ section, you can read up on the law relating to bad driving, and get some practical tips for what to do if you’ve been in a road traffic crash. You don’t have to be a cyclist to use the site – anyone travelling by any mode of transport can log their experiences.

The idea behind Stop SMIDSY is that there is much more our society can do to discourage bad driving. As the UK’s national cyclists’ organisation, CTC has heard many stories over the years about police or prosecutors failing to act in ways that adequately protect cyclists. For example, we’ve heard about police failing to interview witnesses or losing evidence, or prosecutors deciding not to prosecute drivers even when it seems obvious they were in the wrong. By creating a database of these stories, we will form a picture of what is actually happening to cyclists on our roads, and what needs to change.

The main reason people give for not cycling is that they are concerned about safety, even though cycling is actually relatively safe – the average cyclist would have to cycle for 21,000 years before suffering a fatal injury. Most cyclists will not have experienced a crash resulting from bad driving. But you can still log incidents where you felt intimidated or threatened. By taking part in Stop SMIDSY, you can help reveal the frequency of bad driving, and help us to make it safer for everyone.