It seems perverse that the most difficult and testing challenges often start life merely as innocent suggestions, made in conditions at the polar extreme to those of the adventure itself. In my case, I was sipping beer and listening to a discussion between the other trustees of the small Kenyan-focussed charity I had recently joined. I was struck by how competent they were and, desperate to find a niche, hit on a brainwave: that I would choose an activity that no one else would even want to try! The resulting statement – that I was thinking of cycling to Kenya – was said with blithe abandon. But damn them for remembering it in the morning.

The most difficult and testing challenges often start life as innocent suggestions, made in conditions at the polar extreme to the adventure itself

Without even considering whether others might be interested, I returned to the office and breezily repeated my plan; whereupon one of our cycle couriers, Mark, immediately said that he’d like to come too. At first amazed, I was less surprised when, five minutes later, he returned to mutter, ‘err…by the way…where exactly is Kenya?’

We were a eclectic bunch of cyclists, united only in terms of amateurism and a general dislike of lycra

Over the next nine months we attracted a total of 11 riders, an impressive feat considering there aren’t many who can cycle 10,000 km, take 6 months off work, and raise £5,000 for the charity on top of funding their own costs. And we were a correspondingly eclectic bunch of rag-tag cyclists, united only in terms of amateurism and a general dislike of lycra. There were nearly equal numbers of men and women; an age range from 18 to 36; plus a noisy Australian and a quiet American to complete our cultural breadth. No one had much money, so we begged and borrowed our way to find some (almost) appropriate kit.

And so, in September last year, we converged on Midsummer Common for a leaving party attended by friends, family and a smattering of press. There was a successful auction, the obligatory chest and leg waxing, and at least one fraught mother trying to squeeze an extra fruitcake into her son’s bursting panniers. The moment of leaving was particularly comical: as the cameras rolled and the Kenyan High Commissioner started his countdown from 10, Mark’s front rack fell off, Keiran’s tyre spontaneously deflated, and we all realised no one had a map. Luckily we nearly ran over the cameraman on the way out, so removing the evidence.

My first thought, once we had shaken-out into our three teams and were properly on the road, was how lucky we were to be doing the journey this way round, from the UK to Kenya. Amongst us were those who had never put up a tent, never zipped a sleeping bag, and one who had never left the country. Therefore it was wonderful to follow the last of autumn’s heat and myriad colours across Europe, slowly adapting to our bicycles and the pace of life. I remember a round-the-world cyclist comparing his ride to a series of day-trips, with camping in between. ‘And I love both day-trips and camping!’ had been his remark. I liked his attitude, and our legs very quickly grew tougher, and our backsides became worn to the shape of a Brookes saddle.

This feeling of preparing ourselves for a tougher challenge, one that was just around the corner, remained until late in the trip. The expectation of future hostility was always there, yet the reality was one of incredible hospitality, especially in countries such as Syria and Sudan. With the exception of some nights in Ethiopia, we felt safer abroad than at home. And on the road we were treated with more consideration by the likes of Turks and Jordanians (and always a friendly toot) than by overwrought Europeans in their fast cars. In Khartoum, a traffic jam rearranged itself to allow us passage.

There was one country that took perhaps an overly diligent view of our need to be protected as tourists. The Egyptian police were so concerned for our safety that we received a vehicle escort for the length of the country, at one point involving seven cars and two motorbike outriders. We will never forget the Captain who rigged up his car’s radio to the external speaker system and booted out 80’s rock anthems as we cycled along the Nile. 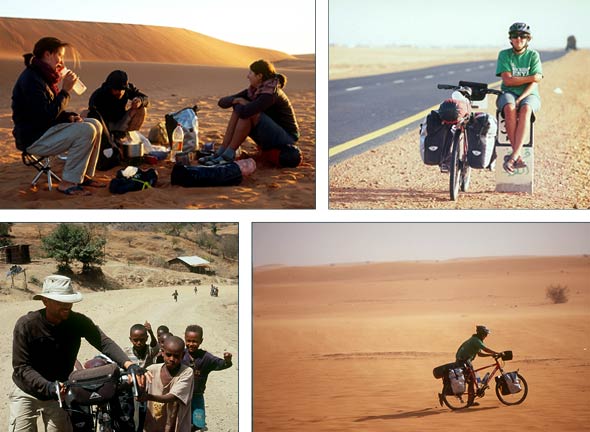 Perhaps it is because we travelled in groups and were unusually laden with panniers, washing and the day’s food, that we were generally given plenty of space on the road. Exceptions were Simon’s ‘Bob’ trailer being removed by a boy-racer as the car lost control coming round a tight bend; and in Turkey a lift to collect a replacement tyre ended with the car in a ditch, a squashed bike and a trip to hospital. 4,000 km by bicycle without incident, followed by 4 km in a car…and it crashes.

Our daily routine was simple: to rise at dawn, finish at dusk and try to fit as many meals as possible between the two. In this there was often heated discussion: could the merits of third breakfast outweigh the morale of early lunch? In the desert we would ordinarily take an extended break during the hottest hours, but on average spent something like eight hours in the saddle. We always had plenty of sleep, the local food was unfailingly nourishing, and even sandy tracks, oppressive heat and silly hills rarely dampened our spirits for long. 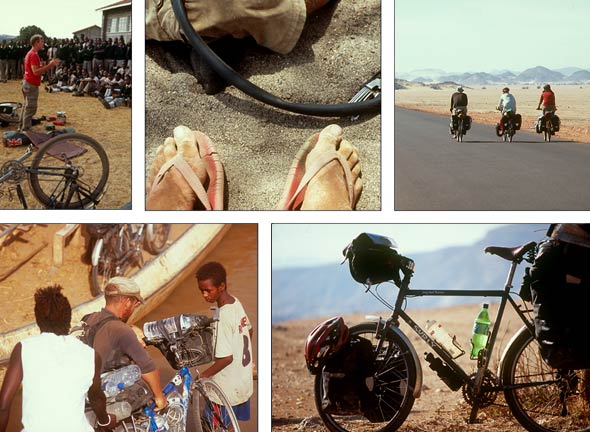 Not much beats the ability of a long cycle tour to cover large distances, yet without missing any of the sights, smells and the interaction that brings a country to life. Particularly in poorer countries, we felt a close affinity with the locals that came from living in similar conditions: sleeping under the stars, holding few possessions, and keeping a mind towards the important things in life – food, health and friendship. And after a trip like that, although the world may physically have felt smaller, so had our relative importance within it been correspondingly humbled.

Of course, the purpose of the ride was to fundraise for the amazing charity, HSK (www.hsk.org.uk), that builds and equips schools in poor rural areas of Kenya. As such, the cycling was important as a symbolic journey: delivering funds and best wishes from the UK directly to the children in Kenya who so desperately needed the help. To reinforce this point, we stopped wherever possible en route and gave presentations at local and international schools – and were then able to talk to the Kenyans about this huge groundswell of support that we’d collected across Europe and the Middle East. At the moment we have raised well over our £60,000 target, enough to build and equip a school for 700 pupils.