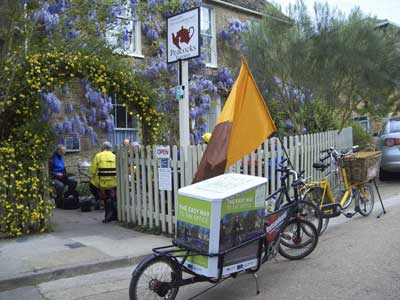 ‘Congratulations for the ride!!!! it was perfect!!’ – Mari

It was 44 in 2007, 157 last year, and this year 385 people rode to Reach Fair on the May bank holiday. That total, the good weather (despite a few showers around noon) and the positive feedback means that all the careful planning by the Bike Week organising group and volunteer helpers was worthwhile.

The very existence of a well-organised cycling campaign made organising this event a cinch. The email lists and newsletter distribution procedures helped inform members and mobilise volunteers to distribute our publicity leaflet.

‘We both had a very enjoyable day and will now look for a Sustrans map of other local routes to places we’ve yet to explore.’ – Margaret

The colourful leaflet was designed by a committee member, and production costs and expenses were efficiently handled by our treasurer. We worked in co-operation with County and City Councils under the guise of ‘Cycle Cambridge’.

They covered the cost of leaflet production, offered the temporary road closure of Ditton Lane, and extra signage at a couple of other junctions that helped to manage the risk of running the event.

We are also grateful to them for providing two support bikes in the form of Outspoken Delivery. They were able to act as marshals and do simple bike repairs. Cycle Cambridge had cleared the whole route of debris and overhanging vegetation beforehand so that this time there was only one puncture compared to the several reported last year. Liability insurance was provided by BikeWeek.

Thanks to the Reach Fair organising committee, the cycle parking was much better this year. It was in a back yard, much closer to the action and guarded by chickens and horses.

Reach Fair itself is a traditional and historic fair, and opens with a proclamation from the ‘King’ which must date back 800 years, extending the right for the village to hold a fair and asking undesirables to leave. The fairground rides such as the hand pull swings and the carousel tend to be more traditional than sensational. About 90% of our riders just stayed for the fair.

‘I enjoyed the cycle ride because there was lots of scenery and I especially liked the villages we cycled through because it was fun looking for the house I liked the most. Also my friends and old teacher were there so that was nice. It was also lots of fun at Reach Fair. Overall I think it was the best way to spend my bank holiday Monday!’ – Emma (10)

Thirty-five of us rode on through Wicken to Ely, where we enjoyed the aromatic wisteria at Peacocks Tearoom. Ten took the train home but the rest of us rode back. At Reach we managed to get a drink and planned an alternative route via Swaffham Bulbeck Lode and the old Mildenhall railway line.

Nine of us made the survivors’ photo outside the Fort St George at 7:45 pm.