Regular readers of the Newsletter over the last few editions may have been following the saga of the proposed changes to the entrance to this path. Some £70,000 is being spent on remodelling the entrance way.

We objected that the amount of car parking being retained meant that the opportunity for a proper entrance, following the cyclist desire line, was being missed. Instead, cyclists were to be kept on the pavement and made to go via a blind corner. Cycle parking has been provided, as a result of our intervention.

Despite our protestations at the North Area Committee, the plans that are now being implemented definitely do not involve the principle of direct access to the path. Sadly, the minutes of that meeting do not give a clear indication of what Councillors agreed on.

At the time of writing, the works appear to be paused, and there seem to be negotiations behind the scenes on what exactly should happen. The works were supposed to be signed off by one of the Councillors, but we have received no response to our enquiry asking when this was done, and by which Councillor.

See the next Newsletter for an update on this saga!

Guided bus on the move

In the middle of April, interest groups and other members of the public got their first ride on the Guided Bus. We were there.

Concern had been expressed previously that the guide wheels could be a hazard to cyclists. It was clear from the demonstration that this wouldn’t be the case: these wheels only stick out a few centimetres and if you were that close, your handlebars would already have collided with the bus.

The test run was only over a short length of the track, behind the science park and out to Histon. When it is all done, the bus journey time by bus from St Ives to the Science Park should be under 20 minutes.

The cycleway alongside will not be open until probably the end of the year. The equivalent journey time is about one hour (though that’s door to door). The stops aren’t finished yet, but it is clear there will be a goodly amount of covered cycle parking. 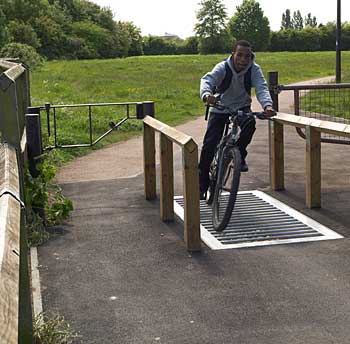 Has the last surviving gate onto cycle routes across the Cambridge commons now gone? Work has been completed at the entrance onto Coldhams Common by Abbey Pool to install a mini cattle grid alongside the swing gate. We think this was the last surviving gates/pinch stile. This completes access to commons cycle paths by cattle grid that we successfully lobbied for as long ago as 1996, most of which were installed at the time. 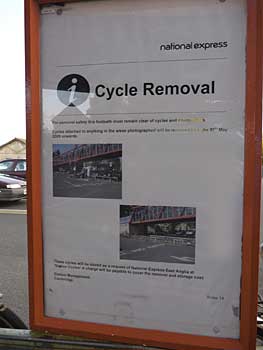 Where does National Express expect cyclists to park?

National Express has put up notices at Cambridge station saying it will remove bikes not parked in racks from 27 May. Since there are no racks to spare, quite where they expect cycles to be parked is a mystery.