Speed humps (sometimes known as ‘sleeping policemen’) have been around for at least 50 years, and although well-designed modern ‘sinusoidal’ humps aren’t too bad even for cyclists, many humps are bad for cyclists, bad for cars, bad for lorries, bad for residents and bad for the environment.

In my youth, I first encountered speed humps on the new University of Surrey campus, where humps like half drain pipes were laid across the road. My friend with a Citroen 2CV discovered that the faster he drove the smoother the ride! I still find newly installed humps that are almost the same, and impossible to cycle over at above walking pace.

Now on the same day in April, the County Council adopted a new policy for 20 mph speed limits, and the DfT announced a consultation which is likely to make it even easier to have 20 mph zones in residential areas or outside schools.

In simple terms physical calming, such as speed humps or chicanes, is no longer a requirement for a 20 mph zone unless mean speeds are above 25 mph. In Portsmouth a large number of roads are within a 20 mph zone, and only if other methods fail to reduce the mean speed below 25 mph will physical calming be considered at problem locations. Of course, where and how you measure mean speed is also critical, as every statistician and the upper quartile of the population knows.

In general, such zones should not require any traffic calming, and some police forces (such as Hampshire) are even using live policemen to enforce 20 mph limits. The DfT and Home Office are also likely to approve wireless-linked ANPR (Automatic Number Plate Recognition) cameras to monitor speeds in residential areas.

I don’t think anyone believes that speed humps should be used in the proposed 20 mph zone within the inner ring road, but there are still those who think such humps are a good idea in residential areas. Of course, if you are a resident woken up by a builder’s van or lorry, apparently complete with a set of timpani, at 5 am, or an ambulance driver trying to get a heart attack patient to hospital in a hurry, you are likely to think otherwise. 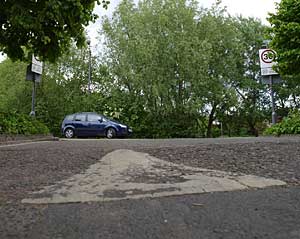 Such humps are also costly when done properly, especially when compared with the cost of a TRO (Traffic Regulation Order), a few 20 mph signs or even a few hours of police time.

Please can we have more 20 mph zones in both villages and residential areas within Cambridgeshire? Death to sleeping policemen, but let us have a few more live ones around.