Following on from the review in January, the Traffic Management Area Joint Committee agreed to remove the right-turn ban. This decision has been referred to Cabinet as it is against council policy, so it remains to be seen whether that will stand. However, the crossing itself has recently been given a red surface which we had asked for and we hope that this will discourage motorists from blocking it.

The cycle lane from the cycle bridge to the junction with Tenison Road has finally been resurfaced, which now gives a very much smoother ride. This is among a series of renewals of surfaces and markings underway as part of the Cycling Town project (now branded Cycle Cambridge). 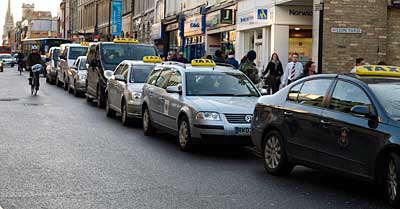 Over-ranking by taxis continues to be a very considerable problem here. The Campaign’s photomap now must have at least 100 photos of taxis breaking the rules. The problem is that taxis waiting in the section of road where they shouldn’t be waiting force buses to overtake into the path of oncoming cyclists.

We also want to see clear action being taken by the Taxi Licensing Office to call in drivers, during peak taxi earning hours, for every report received. We would also like to see a clear statement from the Cambridge Licensed Taxi Owners Association that they regard over-ranking here as unacceptable, in the same way that we have made clear statements about the unacceptability of cyclists using pavements and going through red lights.

This route has reopened but the diverted traffic using Sidney Street has damaged the surface, which is unsuitable for heavy vehicles. It may be possible for the County to claim compensation from Anglia Water for this (since it is their storm drain that was repaired in Hobson Street). 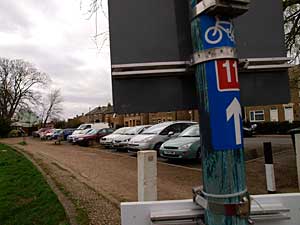 As briefly reported in Newsletter 82, we have been pressing to ensure that the changes proposed at the entrance to this path from near the car park are made cycle-friendly. Officers had proposed a dog-leg arrangement with a blind corner.

A representative of the Campaign spoke at the North Area Committee on 22nd January 2009, and most Councillors were persuaded by our arguments. They went with a compromise proposal which should result in a much better arrangement for the path, which gets cyclists off the path and onto the road sooner, from the corner of the current parking bay nearest to the path entrance, rather than going in front of the seating. Officers seem content with the compromise, so we look forward to implementation to improve what is currently a poor entrance to a pleasant and significant route. We are not aware of a date having yet been set for the work to take place. 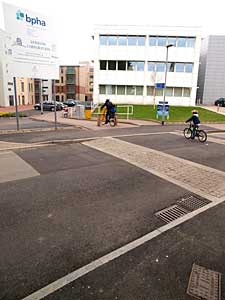 A raised table has been erected at the entrance to the Chesterton side of the Riverside Bridge, on a blind corner where cyclists join and leave the cycle path. Do you think it is effective at slowing traffic? Are the details of the design satisfactory, for example, are dropped kerbs in the correct places and are they pleasantly flush with the road? Or are there hazards? At least the removal of the hoardings alongside the new development means you can see what’s coming now whereas it was impossible before.

National Express East Anglia are offering a cycle rescue service if, because of accidental loss, damage to the bike or injury to yourself, you’re not able to finish your train journey. The perks are similar to those that a car breakdown service provides so you could be taken to the nearest bike repair shop, the next train station, overnight accommodation or if you’re near enough, home. It only applies in Cambridgeshire, Suffolk and Norfolk. Details are available on: www.nationalexpresseastanglia.com/services/cycle_information/cycle_rescue_service

CycleStreets, the new UK Journey Planner and Photomap is now live. Created by Simon and Martin from the Campaign, it lets you plan cycle routes, and add photos.