Author of 50 quirky bike rides and writer for many a cycling journal, Rob Ainsley has been posting a blog called Real Cycling for a few months now, which we thoroughly recommend bookmarking. Have a look at it at realcycling.blogspot.com – it’s an entertaining read. While largely London-focussed (do you know about the zen streets of Southwark, the ephemeral minute thoroughfares which barely get a look in on the map?) it’s also about cycling, the kind of real cycling we’re all doing every day, with a light touch that the subtitle Everyday biking from A to B via other Letters exemplifies. As he says,

‘Real cycling is not about gear ratios. Or wearing lycra the colour of rainforest toads. Or pedalling to the country pub in the sun, then getting a taxi back because it’s dark and raining.’ 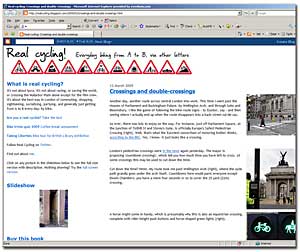 His test for real cyclists: have you ever shifted a huge load? Had a bike nicked? Recognised someone by their bike? It’s not about lycra. ‘It’s not about racing, or saving the world, or crossing the Nullarbor Plain alone except for the film crew. It’s about the best way in London of commuting, shopping, sightseeing, socialising, partying, and generally just getting from A to B every day: by bike.’

David Hembrow, a long-time Cambridge cyclist, now lives in Assen in the Netherlands and posts his own blog A view from the cycle path from there. It’s at hembrow.blogspot.com

And while on the subject, a little closer to home, you could keep an eye on Richard Taylor’s Cambridge blog. While it’s a serious commentary on all sorts of Cambridge issues, cycling features quite high on the list and it can be a good way of finding out what is being said at council meetings. You can get at the cycling-specific articles with this link: www.rtaylor.co.uk/tag/cycling