Cycle Infrastructure Design is the Department for Transport’s consolidation and re-writing of a diverse collection of guidance notes and other material published over the years. We said two issues ago we’d come back and review it properly.

It is described as a Local Transport Note (number 2/08), but is in fact a fully fledged book running to 90 pages and £26. In many ways it could become the bible for people implementing cycling measures on the ground.

It’s been a long time coming. Months and years went by after earlier drafts were published, which suggested to the conspiracy theorists amongst us that there was dispute within the DfT about some of the more permissive contents. In the end though, my feeling is that what we have ended up with says many of the right things but is ultimately rather underwhelming. 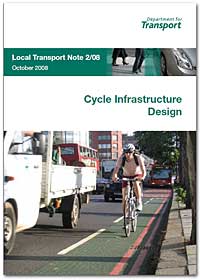 The new book fills the shoes (should that be pedals?) of Cycle Friendly Infrastructure which is now rather long-in-the-tooth. Innovative in its day, it was endorsed by the then Department of Transport but written by cyclists who knew what they were talking about. It never had the status that a Local Transport Note does in influencing urban design. In that respect the new document has clout.

The original Cycle Friendly Infrastructure was described to us by one County Council officer in the ’90s as ‘a rod to beat our backs with’, so often did we have to point out the inadequacy of things that were proposed against the guidance. A lot of what is in the new publication is also not new guidance and also doesn’t reflect reality on the ground.

Like nearly all the guidance in the past twenty years, Cycle Infrastructure Design begins from the position that building infrastructure specifically for cyclists isn’t necessarily the right place to start. Traffic reduction and speed reduction are the first ports of call. Plonking cyclists onto the pavement is the last. Sadly, so often in the past the hierarchy has been implemented the other way around.

Cycle Infrastructure Design is excellent in the way it recognises some fundamentals about cycling that are so often lost when building things. That there is more than one kind of cyclist, for example. That if a facility is not convenient, people won’t use it. That the road network itself is ‘the most basic and important cycle facility available’.

The following sentence needs to be tattooed on the hands of everyone who aspires to provide facilities for cyclists: ‘There is seldom the opportunity to provide an off-carriageway route within the highway boundary that does not compromise pedestrian facilities or create potential hazards for cyclists, particularly at side roads.’

These are such obvious points, and things we have been saying for years, not least in our 1996 manifesto. Yet so often convenience and comfort are sacrificed to the god of safety.

Safety is not absolute

Cycle Infrastructure Design addresses head-on the issue of risk and liability. Very often facilities have been rejected as being ‘unsafe’ in absolute terms, even though they are an improvement over the alternative. Local authorities sometimes would rather do nothing, and in doing so compromise safety, because they fear being sued over something that isn’t perfect.

There is seldom the opportunity to provide an off-carriageway route within the highway boundary that does not compromise pedestrian facilities or create potential hazards for cyclists, particularly at side roads’ – DfT official guidance

The new document is clear that safety assessments need to compare a proposal with the alternative options, not just assess it in isolation. The example they use is strange, however: ‘some practitioners dislike cycle contraflow schemes because they believe that they are inherently hazardous. However contraflow travel can be safer than withflow travel as the contraflow route may mean cyclists can avoid a longer, heavily trafficked alternative route.’ The second part is clearly true, but where is the evidence for the notion that contraflows are inherently hazardous in the first place?

The document strengthens the previous negative guidance about putting cyclists on the pavement. Quite rightly, the DfT condemns this third-rate provision.

‘Conversion of existing footways to permit cycle use should only be considered when on-carriageway options have been rejected as unworkable. In particular, hearing and sight impaired pedestrians have problems sensing the presence of cyclists. … The potential for conflict between cyclists and pedestrians is greatest where width is restricted, flows are heavy and their respective routes cross each other, such as where a cycle track passes a busy bus stop. The speed differential between cyclists and pedestrians can exacerbate this.’

Cycle Infrastructure Design lacks much in the way of innovation. However, it does endorse a few new ideas that have been tried out around the country. One that hasn’t been used in our area much, if at all, is the removal of centre lines. On a narrow-ish, lightly trafficked road, you put in wide (advisory) cycle lanes, knowing that there isn’t then room for two motor vehicles to pass. It keeps the motor vehicles well away from cyclists under normal circumstances and vehicles have to recognise they are invading the cyclists’ space when they need to pass. It could be used on quiet lanes outside the city where the volume of traffic just doesn’t justify building an expensive cycle track. For example, we were contacted by Stow-cum-Quy Parish Council about a road from Quy towards Bottisham, well used by village college students but really carrying very little traffic. Neverthless, any traffic at all seems to be considered a scary prospect. This kind of solution could work well there.

Another idea seems much less useful. There’s a very prominent picture of a cycle bypass around the back of a bus stop. This is abysmal. It only needs one look to see that most cyclists wouldn’t use it. It’s narrow and has a sharp turn coming out of the end. It violates exactly the principles they espouse. The only time when you might possibly want to use it is when a bus is blocking the road (and only then because of the badly placed island). But that’s exactly the time when the bypass will be blocked by people crossing it to board the bus.

So why did I describe Cycle Infrastructure Design as underwhelming? Firstly, it seems all so obvious. It’s been obvious for years. Previous publications have said it, to little avail. Minimum width recommendations have continued to be treated as maximums to aspire to. And a large number of the images show fussy or frankly poor quality infrastructure – instead, it should have been a showcase of best practice, so as to enthuse designers.

One of the promises of the Cycling Town award is that the infrastructure it pays for will be to a much higher standard than we have seen before. We really do hope and even believe that we will see some excellent provision coming out of that project, an order of magnitude better than we have seen before and exceeding the guidelines rather than failing to meet even the minimum recommendations.

Secondly, Cycle Infrastructure Design doesn’t really push any boundaries. Though it promotes convenience it is still very cautious about, for example, priority at crossings. Whereas in the Netherlands, the starting point is to remove as many of the impediments to cycling convenience as possible, the UK guidance is still very half-hearted about this, despite the fine words in section 1. It doesn’t promote wholesale removal of one-way street restrictions, merely shows how to do it in any particular location. It doesn’t promote wholesale turn exceptions at traffic signals (rare in this country) but does say how to do it. ‘Define a route, now here’s some things you can do along it’, rather than ‘do this everywhere’.