We are pleased to announce that, thanks to the generosity of a donor who wishes to be anonymous, we have been able to hire the services of a planning researcher, one day a week, to help us deal with the great volume of large planning applications that have consequences for cycling.

We welcome Rohan Wilson to the Campaign. Rohan is employed for the rest of the week by Sustrans as their Area Manager for Cambridgeshire. Members had the opportunity to meet Rohan at the August monthly meeting. 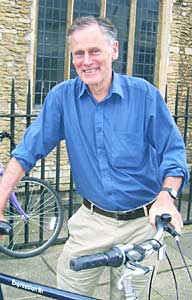 As our Planning Researcher, he will be extracting information from planning applications that is most relevant to us, and helping the Committee in getting letters and related documents written so that we can influence these developments at an early stage. The principal focus is on the large new housing developments (still!) proposed around Cambridge.

Although Sustrans sometimes has a different focus from our own, we have briefed Rohan on the various aspects of most concern to the Campaign, and he is very familiar with the principles we set out in our new paper, Cycling in New Developments. However, the link with Sustrans means that we hopefully can benefit from a reduction in duplication of effort, as both bodies need to study and respond to these applications.

Despite taking on a Planning Researcher, there is only so much that can be done in the time available. So help from members around the city is still very much needed to alert us to potentially problematic planning applications and to study those coming through the system, and – of course – campaign on those which could cause problems in some way for cyclists.