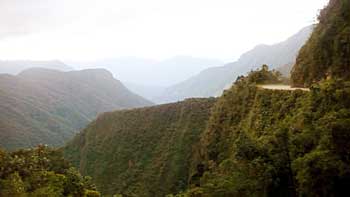 This summer I visited South America with a friend, my first time on a plane in seven years, and leaving co-ordination of the Campaign for six weeks in the hands of the rest of the Committee! Bolivia was amongst the interesting countries I visited, and there I went on a mountain bike ride down ‘The World’s Most Dangerous Road’ (WMDR), a title which is well-deserved.

The road is basically a 64 km downhill dirt track, about four metres wide, running round the edge of mountains with a fairly steep drop of 600 m+ in most places, making a rope useless if you fall.

The road runs from near La Paz – an extremely characterful city in Bolivia, to Coroico. It starts from La Cumbre, some 4,700 metres above sea level, ending at 3,600 m at a beautiful animal sanctuary with hot showers and local beer, both much appreciated. Oh, and a free ‘survivors’ t-shirt.

Until recently, the road was the only trade route through this part of the Andes, which at its worst killed over 350 people in a year, with one vehicle every fortnight going over the edge. Having ridden down it, it is easy to see why. There is little room for overtaking (3.2 m wide at one point), the edges are steep, and there are constant bends. There are crosses at several points along the route, a stark reminder of its hostility. 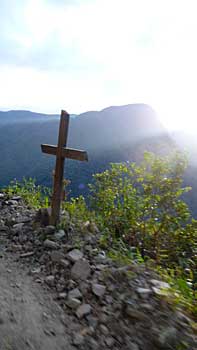 Gravity Assisted Mountain Biking, the leading company in the area, was established in 1998 and practically invented the use of the route for mountain biking. It remains the best-respected company offering the ride down the route, and I can see why. The bikes we used were well-maintained, full-suspension mountain bikes with high-quality brakes – the most important component, I soon learnt! The bikes are maintained to western standards by local Bolivians, and indeed when my gear cable snapped, it was repaired instantly and I was straight on my way again.

Gravity have seen only a single death in 10 years and 36,000 people on their watch which, given the terrain, is pretty remarkable. All the other operators combined have had fewer people travelling but very many more deaths.

A new (and very expensive but still slow) road has recently opened, leaving the original WMDR almost exclusively used by mountain bikers and the support vehicles that follow them. During our day there, no other vehicles passed us, other than a motorbike that had to go slower than the mountain bikes at several points because of the danger of accelerating off the edge.

I am not an expert in mountain bike riding – as to me a bike is basically something to get me from A to B and little more. I also know very little about the mechanics or parts of bikes. But our group (one of four that day) received excellent instruction from Alastair (who owns the company) before and during the ride. And this equipped us with what I found to be non-obvious points that meant our riding down was much more controlled and safer than it would otherwise have been.

By far the biggest problem was the pain from keeping fingers slightly on the brakes for such a long period of time! And it was sad to have to concentrate on the road and not on the breathtaking scenery all around us. 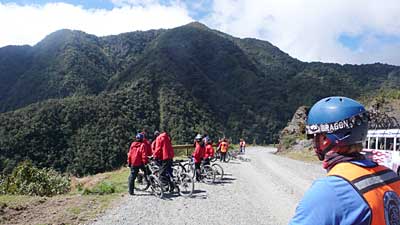 The ride down took most of the afternoon, and we had to stop at several points for instruction given the different terrain as we went. At one point the temperature changed from needing layers of clothing to sweating within only a few minutes. A key problem was often having to dodge large sets of dusty stones that threatened to disrupt the angle of the bike while going down at speed.

In the end, it wasn’t as scary as I expected, though I dare say it would have been so had I been less cautious, or gone with a group not run to the highly professional standards that I experienced. If you should happen to be in Peru or Bolivia, I recommend this ride and Gravity Assisted Mountain Biking rather than one of the other cheaper operators keen to cash in on the act.