We have now formally launched our two new major brochures: Cycling 2020 and Cycling in New Developments. These two documents are arguably the most impressive and full-featured items we have ever published and we hope they will give a clear indication to decision-makers of the seriousness of our intent in seeing cycling improved in the areas of new housing which are being planned.

Copies of each have been sent to decision-makers around the city and beyond. Thanks to Shirley who kindly took on the task of distributing these. Copies of Cycling 2020 were also distributed at the national conference on 10th May. 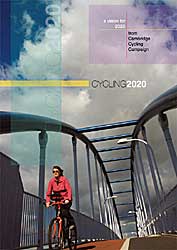 We hope that Councillors might consider giving public support in some way to these documents and the various proposals in them. For instance, motions of in-principle support for particular proposals, e.g. the Chisholm Trail, would be useful as a way of galvanising interest and action.

Printed in full colour, some 2,500 copies were distributed in May, and your very own copy should accompany this Newsletter.

All Councillors have received a copy, as will a wide range of other decision-makers, influential people in Cambridge, media contacts, conference delegates, national figures, developers of the new housing settlements being planned for Cambridge, our members, and others.

Cycling 2020 was formally launched at the CCN/CTC National Conference and a range of promotional activities is planned.

Cambridge is often known as a cycling city. Its vibrant cycling culture, with probably the highest rate of cycling in the country, is an asset to a city which would otherwise be even further choked with traffic. Yet we are a long way from the sort of standards used in Holland.

Through Cycling 2020, we invite readers to share the vision of a world-class cycling city that we set out in the brochure.

Cycling 2020 can also be read online at www.camcycle.org.uk/cycling2020.

Cycling in New Developments sets out our aspirations for the new settlements being planned.

In it, we summarise our views on the best way to provide for cycling in new developments and set out how a high-quality network can result in high levels of cycling and walking. With 47,500 new dwellings by 2016 planned, it is essential that cycling rates of 30-40%+, common in Holland, can be achieved, to avoid the gridlock that would otherwise result.

It is a practical guide, aimed especially at developers of the fringe developments and those judging their proposals. It does not deal with existing problems around Cambridge but instead explains best practice when a developer has a blank sheet of paper on which to create a new settlement.

The new developments around Cambridge are effectively a blank sheet of paper. None of the usual excuses apply for cycle lanes that stop when you most need them, or lack of cycle parking, etc.,. 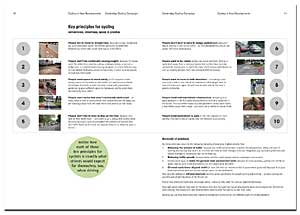 Shared-use paths must be avoided in the new developments. These are disliked by cyclists and pedestrians, though currently used extensively in Cambridge. Instead, space must be allocated for cycling, to enable more people to choose to cycle rather than drive.

Ignoring the need for high levels of cycling will result in 50+ years of car-dominated travel patterns in a world of rising oil prices, climate change, and epidemic obesity. Cycling is an ideal solution to all of these and a worthwhile method of transport in its own right.

The guide aims to give Councillors, officials, and developers the information they need to ensure that cycling will be the natural option in these new areas. It is attractively laid out, glossy, readable, and easy to flick through.

Cycling in New Developments is also available on our new Planning website at www.camcycle.org.uk/planning/.