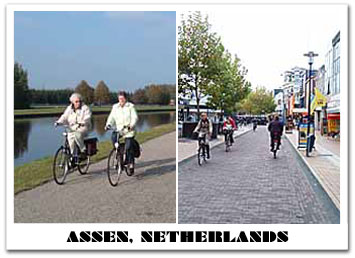 David Hembrow, former Committee member, sends some views from the Netherlands, where he and his family now live.

Despite many visits, it was only after moving here that we appreciated how much the Dutch cycle. Virtually everyone cycles, from primary school age to pensioners. All our neighbours cycle to work, shops and school – including the over-80s. Most households have cars, but cycling is the natural way to travel. The infrastructure invites you to join in.

Assen, the city we now live in, was picked after quite a bit of research. It is the capital of Drenthe province – known as the “Fietsprovincie” (“Cycling province”). Assen is just under 30 km south of Groningen – visited by the Campaign ten years ago. Provision for cyclists here is first class.

Assen has two-thirds the population of Cambridge at 63,000 people. On average they make 70,000 cycle journeys per day. This is not considered to be a particularly high figure, and even if it were, there is no resting on laurels. Arterial routes to the city centre, in particular, are being improved. One expensive-looking new bike path of a few km in length required two large bridges (one carrying a dual carriageway) and a few small ones crossing the canal – which is being reworked over a length of several kilometres.

Cycling in the City

This 5 km-wide city is a delight to cycle in, with over 200 km of segregated bike path. Generally, we ride to the city centre without having to stop at all and can leave our bike directly outside the shops. If we were to drive, we’d have several sets of traffic lights and a roundabout to deal with, and we’d have to park outside the centre. Cycling is much more convenient.

You don’t have to go out of your way to find cycle paths, but have a choice of routes to most locations.

You don’t have to go out of your way to find cycle paths, but have a choice of routes to most locations. Wherever you share residential streets with cars, the speed limit is 30 km/h. I’ve yet to have the slightest hassle from a driver. They don’t block cycle paths and they stay respectfully out of the way when you’re crossing side roads, at which cyclists nearly always have priority.

There are an enormous number of bike racks conveniently located in the centre. Extra cycle parking is provided for big events.

I’ve had a few visits to the dentist recently. It’s about 2.5 km away and a slightly complex journey as I have to pass the ring road and a motorway junction to get there. However, there are three bike path routes of more or less equal distance to choose from. I ride on about 150 m of 30 km/h residential road at this end and about the same distance of 30 km/h industrial estate access road at the other end. Apart from that it’s bike path all the way and every bit is suitable for riding absolutely flat out. Despite the major roads, one route requires me to stop for traffic at just one set of lights and the worst route has four sets (two of which default to green for bikes so you don’t normally have to stop). By car there is just one viable route involving six sets of traffic lights.

Riding in the countryside

We’ve taken many joyrides out into the countryside since we’ve been here. It’s much easier to find a pleasant route here as you can simply follow signs and never end up on an unpleasantly busy road. If you try to follow main roads, you find yourself on good-quality bike paths separated by several metres of greenery, sometimes on the other side of a canal. I was used to studying piles of Landranger maps before rides so still have a tendency to try to over-plan routes.

Several different types of sign have been put in by different organisations and the signage works very well for both scenic detours and direct routes. Direct routes are usually shorter than those indicated for drivers. Dutch cycle path signage has a long history, the paddestoel (mushroom) shaped signs being first installed in 1919.

The paths are designed to accommodate very high cycling speeds and are used by racing cyclists, recumbents, velomobiles etc. A few days ago I rode to Groningen with a bit of a tail wind and passed the “Welcome to Groningen” sign just 48 minutes after leaving home, having covered 25 km. That’s an average of very nearly 20 mph, on my slower touring bike. Bike paths here really don’t limit your speed in any meaningful way. In fact, I average higher speeds here.

I first heard about Dutch cycle paths being compulsory (in the sense that cyclists are not allowed to use the roads, where a cycle facility exists) some years ago and it made me feel sorry for Dutch cyclists. I was wrong. I had made the mistake of assuming that off-road cycling provision in the UK was representative of that in the Netherlands. It is not close in any way. The Dutch have an almost completely separate network of bicycle roads which are better designed for cyclists than Britain’s car-oriented roads.

Dutch cycle paths are wide, smooth, direct, well sign-posted, well maintained and provide for safe and direct journeys in any direction. Britain’s roads, with their rough surfaces, potholes, cycle-unfriendly attempts at traffic calming and traffic are not attractive by comparison. Our cycle journeys here are faster, safer and more convenient than they would be in the UK.

Dutch cycle paths are wide, smooth, direct, well sign-posted and provide for safe and direct journeys in any direction.

Some English-language commentators give the erroneous impression that the bike paths are not popular. Actually, Dutch cycle campaigners have little interest in riding on roads. The cycle path network is ideally suited for cycling. They do campaign for ever better cycle paths, though, and they’re getting them.

Seen from here, British cyclists seem bizarrely obsessed with cycling on roads designed for cars. It’s so alien that one keen local racing cyclist who read about the Daniel Cadden case asked me to explain why there was a desire to be on the road. Increasing segregation is the norm here. Roads are being narrowed as the remaining “hybrid” provision is removed and replaced by high-quality segregated paths.

Cycling in the UK is a minority activity and will continue to be so while Britain’s cyclists insist on cycling on roads. It keeps the conditions for cyclists bad and the rate of cycling low. What cyclists everywhere need is good provision for cycling. We don’t like sharing with pedestrians so why should we like sharing with drivers?

Virtually all children here cycle to school. School trips are by bike, too. A week after starting school my primary-age daughter’s class made a trip in to the city with a total of two parents and one teacher in charge. The children were all obviously quite experienced cyclists and efficiently made their way to the city centre. A few weeks later they cycled together from the city to a forest. Before the end of their last year in primary school children are taken on a cycle-camping trip.

Virtually all children here cycle to school with school trips by bike, too.

The primary school does not have a car park. The teachers also cycle to school. The deputy head told me that she’d never learnt to drive as there was no point. She brought up her three children on bikes. This is not unusual.

Primary schools tend to be very small and near to homes. However, there are far fewer secondary schools. At my elder daughter’s secondary school, some children travel 20 km each way by bike. Children are just as able to ride unaccompanied to friends, sport clubs etc. I’ve yet to see an obese child. Children have a lot of freedom while parents who have no fear for their children’s lives spend less time ferrying them about.

Once children are big enough to be out of child seats, they ride their own bikes. You rarely see tandems or trailerbikes here, but you do see bakfietsen and child trailers for very young children.

Cycling as a family group (including grandparents) is a very popular leisure activity.

Kloosterveen is a new housing development at the edge of Assen which is positioned similarly to some of the new estates around Cambridge. The standard of the cycling provision is astonishing. This new estate has wonderful bike paths which provide direct routes through the estate past the schools and all the way to the centre of the city several kilometres away. All roads in residential areas, both new and old, have a 30 km/h speed limit.

In Kloosterveen the standard of the cycling provision is astonishing, with wonderful paths providing direct routes past the schools and all the way to the city centre.

Road works avoid blocking cycle paths. When they have to, cyclists are given redirection signs.

The few road junctions with lights for cyclists always have detectors backed up by buttons to press. Cyclists always get enough time to cross and can always cross the entire road in one go. This applies even when there are six or more lanes of traffic to be crossed. There are no central islands with barriers to zig-zag around. Some such junctions default to green for bikes.

Provision for cyclists doesn’t only mean bike paths. There is an enormous amount of cycle parking, including at the railway station and in the city centre. Shops, restaurants and cafes each provide a little extra parking for cyclists, who make up an important part of their business. You may see inner tube vending machines on the outside of bike shops and chests of tools for cyclists at restaurants. There are also several national franchise businesses which do well out of providing mobile cycle maintenance.

Shops, restaurants and cafes each provide a little extra parking for cyclists, who make up an important part of their business.

Before Christmas the temperature was between -4 °C and -6 °C for several days. It’s been below freezing again several times since. However, there has been no dangerous ice on the cycle paths. The council’s four bike-path-specific de-icing vehicles have repeatedly covered all the bike paths since October. They also have machines for clearing leaves and litter.

There is less broken glass on paths, part of which I put down to the frequency of sweeping and part to glass bottles being returnable for a deposit (washed and re-used, not smashed and re-cycled).

While this area has many forests, including within the city, it is very rare that you find damage such as tree roots growing through paths.

I asked my family for their opinions of cycling here relative to Cambridge:

Judy: “Cycling here is safer for the children and for myself. I feel sad that Britain is not the same. There is no comparison in the quality of cycling provision.”

Eliza (14): “I like being able to cycle easily to school and to friends in the city and in villages. You can go fast because the paths are smooth. It’s fun to ride to the city centre with friends and chat on the way.”

No-one had any negative comments…