The CamMobSens project aims to monitor air pollution using mobile phones in a bid to create a “pollution map” of Cambridge. It promotes the social networking of the local community through the provision of a web portal that facilitates back end sharing of real-time and archived environmental data.

The technique is made possible by small wireless pollution sensors and custom software that allows the phones to report levels of air pollutants wherever they happen to be around town.*

Everybody in the area could become a pollution tracker.

Local cyclists are equipped with air-pollution sensors and GPS units that connect to their mobile phones via Bluetooth. So their phones are constantly reporting the levels of carbon monoxide, nitrogen oxide, nitrogen dioxide and noise in the area. And back in the lab, servers are updating GIS visualization tools for Internet users and regular mobile phone users. The sensors used for this project could also be fixed to a pedestrian’s jacket, which means that everybody in the area could become a pollution tracker. 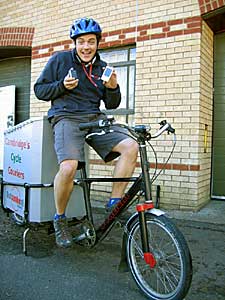 The mobile sensing approach can be used to collect other data, for example, combining the system trialled so far with a separate device to measure lung function using a peak flow meter, (a device used to measure how well a person’s asthma is under control), The CamMobSens team is working with doctors who are very interested in being able to correlate their patient’s symptoms with the air pollution around them. Gathering such data from a large number of people over time could shed new light on the links between air pollution and asthma symptoms, perhaps allowing better preventive treatments.

Cyclists are becoming increasingly aware of the environmental implications of their travel decisions. The availability of timely and accurate environmental information relevant to specific journeys and locations could enable them to make more informed choices. We are hoping in the future to provide bicycle journey planners in Cambridge with information about the least polluted routes.

*The system was developed with help from phone manufacturer Nokia and telecoms provider O2. The CamMobSens initiative (www.escience.cam.ac.uk/mobilesensing) is also one of the ideas explored by MESSAGE (short for “Mobile Environmental Sensing System Across Grid Environments”), a three-year research project which is funded jointly by the EPSRC and the Department for Transport.