Hills Road bridge will be Hell for 30 weeks from some time in May whilst the underpass for buses, cyclists and pedestrians is constructed beneath.

But first, we now know some of the gains after the pains. The new route for cyclists alongside the guided busway from Trumpington to the rail station will open in 2009, and we’ve had confirmation of the arrangements UNDER Hills Road bridge. On the unguided section there will be a speed limit of 15 mph for buses, and a flush kerb at the end of the maintenance track/cycleway/footpath, will enable cyclists to join this short section to get through to the station. There will also be a footway under the bridge.

So what about the pain? Some 4,500 cyclists and 550 buses use the route OVER Hills Road bridge in 12 hours on a typical day, and during the works roughly one third of the width will be obstructed at any one time. Although a footway will be maintained on both sides (at times ‘suspended’ over the works beneath), only a single lane in each direction will be available for vehicles, and that includes cyclists.

The proposal is for a single 3.0 m lane in each direction, which is same as existing width of a carriageway, with at times a ‘weave’ from one carriageway to the other. Large concrete blocks will be required to protect the construction site from straying motor vehicles. We’ve asked that every extra inch possible be added to this width, especially at ‘weaves’.

To increase the GREEN time at the lights at either end of the bridge some turning movements will be banned. Specifically these are right out of Brooklands Avenue and right from Hills Road into Cherry Hinton Road. Some modifications are proposed to make it easier for cyclist to use adjacent crossings as an alternative to these turns.

Much longer queues on the approaches are inevitable, and some temporary bus and cycle lanes will be introduced on the Hills Road approaches. We’ve asked that these are made as wide as possible with other lanes for motor vehicles reduced to 3.0 m, but a ‘squeeze’ by the two-stage crossing outside the Sixth Form College looks inevitable.

This work does not include any widening of the bridge or reinforcement of the footways or parapets, as was discussed a couple of years ago. Maybe if road user charging arrives, either traffic flows will reduce or a pot of money will be found to do such work in the future.

All these arrangements will be done using temporary Traffic Regulation Orders so there is no requirement for formal consultations.

Just be glad you’re on a bike and not in a car!

There’s good news that work on the first new bridge on the Wicken Vision cycle route, over Swaffham Bulbeck Lode, started in mid-January, and is on schedule for completion by May. Sadly this is slightly too late to re-route the Camcycle 20/50 ride that way, but it will be useable for the summer. Funding for this came through a government Growth Areas Fund grant, and requests for the money needed for refurbishment of three existing bridges to complete the route have been made recently.

Thanks to all the supporters of the Sustrans Connect2 scheme in the recent Lottery competition, the Wicken Vision cycle route will benefit with an amount sufficient to build the second of the new bridges needed. 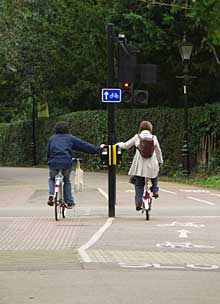 As part of planning permissions for the University’s West Cambridge Site, it was agreed that an alternative route to Burrell’s Walk and Garret Hostel Lane for cyclists would be provided as developments progressed. Now investigations are under way into an improved route to West Road, with a direct signalled crossing over Queen’s Rd linking to an upgraded path over Queens’ Green, similar to that across Coe Fen.

Later we can expect to see a more direct link from the west end of West Road to the West Cambridge Site. Much of the cost of this route will come from University funds as part of the planning permissions.