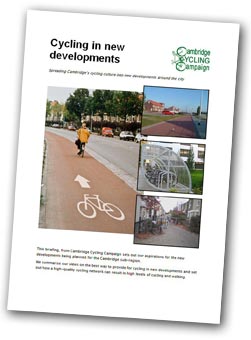 In November we drafted a Position Paper on New Developments, which seeks to explain to developers what we want in practice in the huge new developments being built around Cambridge.

The Position Paper on New Developments should be on our website by the time you read this, and we are happy to send copies to members on request.

The background to the paper is that there is an awful lot of guidance out there nationally which discusses cycle-friendly infrastructure, but little of it relates to new developments. In the last year, we have often found ourselves needing a really good practical and concise guide to what ‘cycle-friendly’ actually means in practice when there is a clean sheet, as is the case with plans to build over huge areas of greenfield land.

The position paper will dovetail neatly with our Cycling 2020 initiative, the main brochure for which is also to be published and launched . However, the New Developments paper is more practical in focus and does not deal at all with existing problems around the network. The paper is also specifically aimed at housing developers rather than the range of stakeholders intended for Cycling 2020.

The Executive Summary, which we reproduce in edited form here, sets out a summary of the 24-page contents of the new Paper.

We set out in this briefing our aspirations for the new developments being planned for the Cambridge sub-region. In it we summarise the best way to provide for cycling.

Cycling fits perfectly with a range of national policies on transport, health, the environment and CO2 reduction; it also dovetails well with the government’s desire for ‘eco-towns’. Over 25% of all journeys in Cambridge to work are by bike and a large proportion of other trips are too. We want to ensure Cambridge’s cycling culture is maintained in the new developments.

Most British cycling infrastructure is of poor quality, because it is not designed with cyclists’ actual needs in mind. Firstly, developers need to make space for cycling. Secondly, whatever seems daft to a car driver is equally silly to a cyclist. Yet in the UK, poles in cycle paths, constant give-ways, etc., are the norm. This approach must be avoided in the new developments. Cyclists really want the same as car drivers want: Convenience, Directness, and Speed.

Providing for cycling often doesn’t mean cycle-specific infrastructure, but simply a cycle/pedestrian-friendly environment. Cycling is much easier when traditional, inter-connected street layouts are used, in line with the government’s new Manual For Streets. Cul-de-sacs and winding roads should be avoided.

We then outline ten key principles for cycling, setting out what convenience, directness and speed mean in practice. As we then demonstrate, the ten principles tend to match what drivers would expect for themselves, too, when driving.

We welcome any feedback you may have, as we will no doubt produce updated editions in future years.