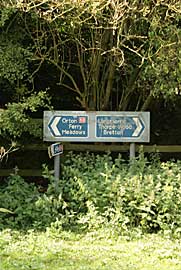 It should have been easy – a five-mile bike ride across Peterborough. Well that was the theory, but the reality was rather different. 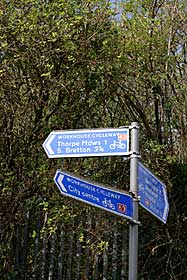 Being one of the many who cart their bicycles around the country, I wasn’t daunted by the prospect of a day working in a different office on the outskirts of Peterborough. Simple, I thought, take the bike on the (then) Central Trains’ direct service to Peterborough, then hop on it and follow the signs to Orton Southgate. Wrong. The train bit was simple, following the signs wasn’t. 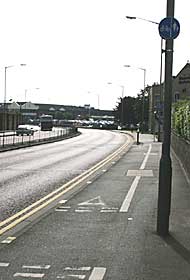 My first problem was that there are no cycle route signposts outside Peterborough train station. A bit of guesswork though and several wrong turns later and I found some under a roundabout, thankfully with one pointing me in the direction of the Ortons. Better than nothing. I just had to hope that they’d get a bit more specific. My next problem was, they didn’t; sometimes even the Ortons, not just Orton Southgate, simply disappeared off the signs.

And then there were the overgrown signs, the ‘hidden past the turning’ ones, the occasional example pointing back where I’d come from, those introducing new routes… It was an interesting journey, with many wrong turns, slamming on of brakes and asking of passers-by. In all, the five-mile journey was more like nine and took over an hour. It all left me appreciating Cambridge’s well signposted cycle routes.