This article was published in 1996, in Newsletter 7.

We offered a free ‘MOT’ check for any pedal cycle, on a fine day in the centre of town. It’s not surprising the event was popular! We were lucky not to be overwhelmed with work. 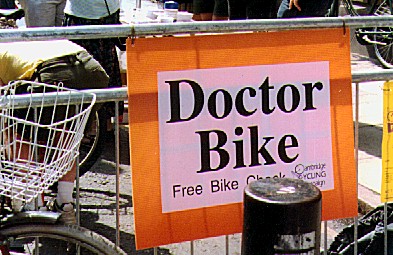 Dave Earl and I started on his bike and those of other campaign members. Passers-by soon got the message, though, and we were busy for most of the day. It took ten to fifteen minutes to check each bike, then, if there was time, we put right the minor faults we found – soft tyres, oil- free rusty chains, rattles. Other faults went on the check list form, with a Campaign membership leaflet on the back. The idea was that this could be taken to any bike shop to ask for the work to be done. I’ve no idea how many people bothered to do that. 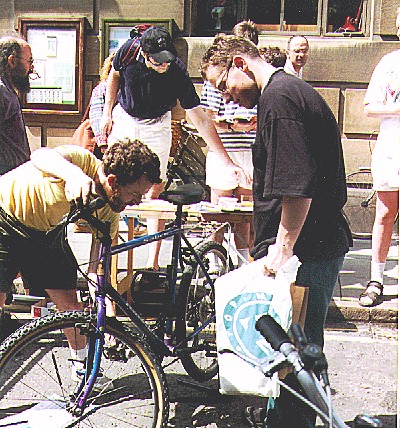 We have one disaster to admit. Slim’s front tyre exploded a few minutes after we pumped it up. It was most impressive (not just the bang: you should have seen Slim’s face, too). The bikes we looked at varied from one of about 1948 to one only a few weeks old. One was not safe or fit to be on the road for about five separate reasons, but its owner seemed pleased just to collect the maximum count of failures; a few were near- perfect. There were surprisingly few punctures, although almost everyone’s tyres were softer than they should have been. 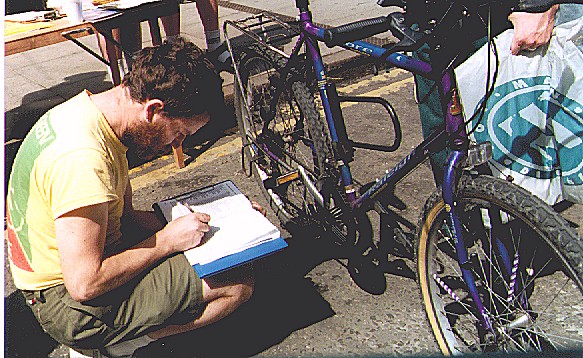 I enjoyed myself, and I think the other Campaign members who worked on Doctor Bike liked it, too. The collecting tin filled up as we worked, so some people must have appreciated having their bikes looked at. Thanks to everyone who helped, not just mechanics but stall workers and all those who brought bikes, sandwiches or encouragement.

Next year? Tell the press, radio and TV very plainly that this is an opportunity for interviews and pictures, perhaps. It would have been better, too, to have someone who wasn’t working on the stall transport the signs and barriers, to make us stop on time. I was tired out at the end of the day.