This article was published in 1996, in Newsletter 7.

10 signs with the wording shown were placed on all major roads into Cambridge just beyond the City Boundary. The signs were up for one week during National Bike Week. The purpose of the signs was to make commuters aware that there are quicker alternatives to their cars for getting to work. More cyclists would lead to better & safer facilities for bikes and increase cycle usage. 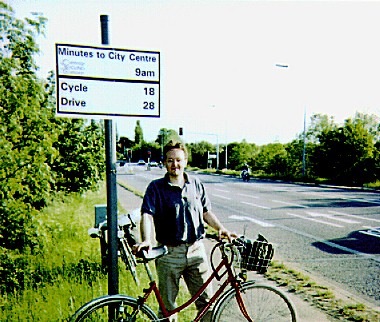 The timings on the signs were distilled from responses to an email survey of members’ own experiences of getting to the city centre. The model journey was to arrive at the Guildhall on foot at 9am starting from just outside the city. It was difficult to decide which numbers to put on the signs because of the wide range starting points and variance of the figures. Some motorists complained it would take them over 40 minutes, but cyclists were all doing it in around 20. One member does it by canoe in 25 minutes.

A large colour photo reached the front page of the Cambridge Evening News, with the campaign logo clearly visible. The idea clearly captured the imagination of the commuting public and worked, I think, because it told them what they already knew.

I have had a number of suggestions on how we could vary the idea in the future:

This event cost your campaign £44 for the artists materials. It took 2 of us about 3 hours to orbit the city on our bikes and put up the signs.