Over 60 people attended the Sustrans meeting on Monday evening, nearly filling all the seats in the Latimer room at Clare College. There was a mix of Cambridge Cycling Campaign members and Sustrans members present. Nigel Brigham from Sustrans East Anglia began his talk with a general background on Sustrans nationally, including the successful bid for Millennium funding for the National Cycle network. The Millennium funded part of the network will be completed by the year 2000. The aim is to complete the rest of the routes by 2005. Nigel then went on to focus on the work being carried out in East Anglia. The presentation concluded with a look at the possible routes in Cambridgeshire, linking into Cambridge. There was then an opportunity to ask Nigel questions and to offer suggestions for possible routes. Jo Martin from the County Council was also present and answered some of the more local issues.

On Tuesday morning, a free Cyclists’ Breakfast was held on Parker’s Piece with the food kindly provided by Stephen and Susan Hill, proprietors of Hobbs Pavilion Restaurant. Stephen and Susan Hill are keen cyclists and ride over 200 miles a week including commuting and taking their daughter to nursery school. They also helped to found the Velo Club Free Press racing cyclists’ club. 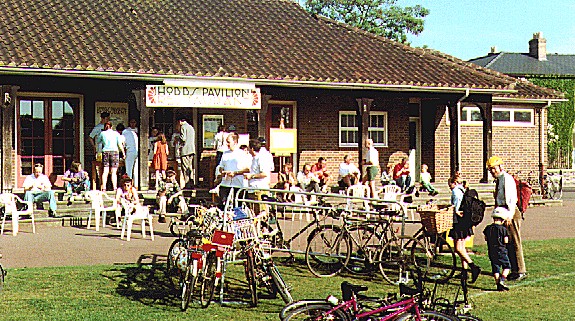 Sunshine greeted us as we arrived to put up the stall and the barriers for cycle parking, the coffee and toast were already on the go. From eight o’clock to nine o’clock, there was a steady stream of cyclists arriving, staying a while for breakfast, and then rushing off to work. A very pleasant time was had by all, chatting in the morning sun whilst being handed free muesli, toast, orange juice and coffee. We estimated that over 120 people came to the breakfast. Everyone was given a “I biked to work” certificate and sticker as part of National Bike to Work day. Less fortunate were the people who rushed past on their way to work without time to stop.

The event also made the newspaper and television. Though both the Cambridge Evening News photographer and the BBC television crew managed to turn up when we were packing everything away and most people had left for work. However, this didn’t seem to matter and Look East that evening featured Dave Earl cycling up and plugging the need for improvements for cyclists in Cambridge. A report made the inside of the Evening News with a picture of Stephen Hill on the new Hobbs Pavilion bicycle (unfortunately the previous one was stolen). 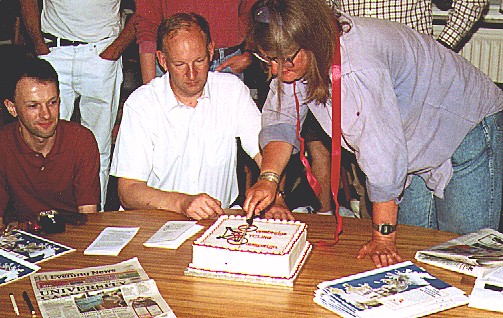 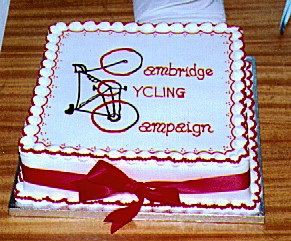 The leisure ride on Thursday was a more quiet affair, and gave campaign members a welcome opportunity to socialise without the need to discuss weighty cycling matters! About a dozen people set off from Parker’s Piece on a sunny summer evening. Dave Earl provided a very well planned route. After riding up Riverside, we took the cycle path to Fen Ditton and then went on to Stow-cum-Quy via the useful cycle underpass under the A14 (a pity there weren’t more of these built elsewhere!). From Quy, we rode on the cyclepath along side the old Newmarket road, until we turned off the tarmac on to some very pleasant (but bumpy!) grass pathways. These took us to Great Wilbraham. After a short ride back on tarmac, we arrived at the pub in Fulbourn for a very welcome pint and a meal. Then it was lights on for the journey back to Cambridge via Fulbourn Old Drift and the Tins. As we approached Mill Road, the numbers began to fizzle out as people made their way home, but a few riders carried on to Parker’s Piece to complete the round trip.

I very much enjoyed the National Bike Week events I was involved in. Though it was a bit of a relief when it was all over after the planning and organisation that everyone contributed in the run up to the events. Considering this was our first year, everything went extremely well. Let’s hope the sun shines again on us next year!.